In the eighties, Suzanne Vega got stuck in our heads with unforgettable hits such as “Luka” and “Tom’s Diner.” Promoting her upcoming gig at the Old Town School of Folk Music on October 8, Vega caught Gozamos up on her life, past and present. Since the 80’s Vega has remained an influential indie artists. Fresh from her collaboration with Danger Mouse, Sparklehourse and David Lynch (what a trio!) on their recently released album, Dark Night of Soul (2010). On the album, Vega write “The Man Who Played God” based on the life of Pablo Picasso.

Gozamos: Good morning, Suzanne. I haven’t seen you for years. The last time was at Tower Records years ago.
Suzanne Vega: That has been a long time.

Gozamos: I just saw Aimee Mann play there. It is intimate and a great space but everyone will be sitting on top of you.
SV: Well, that’s okay (both laugh). I am ready.

Gozamos: Talk about Close-Up. You will be doing songs from both volumes.
SV: Yes, that’s right, Love Songs and the new collection of old songs People & Places. It is kind of hard to present it. It is a new album but older songs. It is a mixture of older and newish, all of it stripped down and done acoustic. It is not a full band. It is me with my guitar player Gerry Leonard and bass player Mike Vesceglia.

Gozamos: What new material is on the album?
SV: The newest thing is the song “The Man Who Played God” which was on the Sparklehorse album that was released in July of this year. I did a stripped down acoustic version of that song.

Gozamos: You did all of these love songs on the first volume. What do you think makes a good love song?
SV: The songs that I consider to be a love song are the ones about love. I have some room to improve to be honest. I feel you can always deepen a love song or widen it. I think my love songs are fairly quirky. So I would not judge my love songs against the standards of all time. When I write a love song I am just trying to express one side of it. I don’t think I have written the quintessential love song yet. 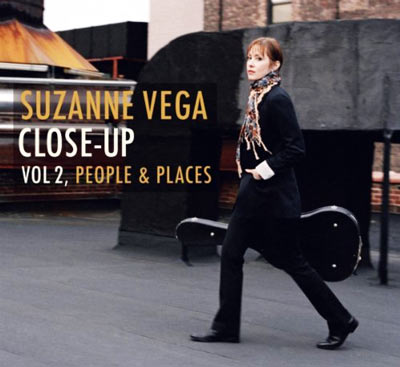 Gozamos: And you are in love and been married for a while.
SV: Yes, it is going to be five years in February.

Gozamos: Congrats. I saw on your website that you are doing a play on the life of Carson McCullers.
SV: Yes, I am doing that in April of next year. It is already booked for the Rattlestick Theatre, which is off Broadway here in New York. In fact that is what I am working on this week. I am working on the script and on the songs.

Gozamos: I didn’t know too much about Carson. What can you tell people about her?
SV: She is a fascinating writer who wrote in the thirties and wrote all the way until she died in the sixties. She wrote The Member of the Wedding and The Heart is a Lonely Hunter. She is from the south. She has a very interesting social view. She is a great and interesting author with a wild personal life.

Gozamos: Did you have to learn a southern accent?
SV: I listened to a lot of her recordings. She has a deep dark thick southern accent. I mimic her as well as I can as well as mixing it in with other influences. So the answer is yes.

Gozamos: I want to come see that.
SV: Yeah, it has been really fun. We have been doing readings from time to time in preparation for the opening in April. The real test of it will be when I go down for her birthday. They are having a big birthday celebration for her in February at the Carson McCuller estate in Georgia. So I am going to go and perform the play there in February.

Gozamos: Oh my gosh!
SV: Yes, Oh my gosh, I have to make sure that southern accent is absolutely credible.

Gozamos: It is something different for you. Have you done much acting before this?
SV: I minored in acting in college, in theatre. I have done little things here and there but this is the biggest role that I have had.

Gozamos: I read your dad is Puerto Rican.
SV: My stepdad who raised me is Puerto Rican. He passed away two years ago. I was raised in a half Puerto Rican family. My mom is actually from Minnesota and grew up in Ohio.

Gozamos: Did you always want to be a singer?
SV: I wanted to do a lot of things in the arts. I wanted to either write or act or sing or dance. I did all of those things when I was kid. I always had people coming up to me and saying, “You are kind of artsy, aren’t you?” Yes, I was and still am.

Gozamos: You studied dance.
SV: Yes, I went to the High School of Performing Arts as a dance major.

Gozamos: That is a school like in the movie and television show Fame?
SV: That is THE Fame school. The one it was based on.

Gozamos: I wanted to go to that school!
SV: It is a really good school, actually my daughter goes there as a vocal major. It has gotten even better than it was back then. Before it was kind of small but now has merged with the other art school. It is bigger and the other academics are really good. My daughter is singing opera.

Gozamos: What a small world!
SV: I know.

Gozamos: We both have come a long way.
SV: That was the year my first record Suzanne Vega came out so I was on tour and I was doing press. I had just quit my day job as a receptionist. So that was fun. I was touring around the country in an RV because we couldn’t afford a real tour bus. It was a great year. We have been doing a little set of songs within the set to mark our 25th anniversary.

Gozamos: I remember listening to your track “Left of Center” on the Pretty in Pink soundtrack in high school and my friend told me to go back and listen to your first album.
SV: Cool. Pretty in Pink was pretty exciting when it came out and that movie has really had legs.

Gozamos: I have talked to so many artists from that soundtrack recently, Echo & the Bunnymen, Psychedelic Furs and now OMD this week. Everyone is still active. I am looking forward to seeing you again at the show. It has been too long.
SV: Great, see you there.

Look for her show at the Old Town School of Folk Music on Oct. 8th at 7 pm and 10 pm, for tickets visit http://www.oldtownschool.org
Suzanne Vega (DNA remix)