“All types of artwork can be political in a sense. You can even say all art is political. If you choose to paint flowers, you refuse to paint artwork that deals with social issues. That’s already a political statement. The type of work I choose to do is a reflection of what I see everyday and experience, or the people I know who live and experience these events,” Salvador Jiménez Flores speaks on his politics and approach to art while fiddling with a construction measuring tape. He pulls the tape out, letting it slide back and forth on the table as we speak. It seems like he’s measuring my words, my curiosity and his response with each casual gesture. His hair, pulled back in pony-tale highlights his grown out dreads. His arms, tattooed with tribal bands and traditional Aztec iconography. 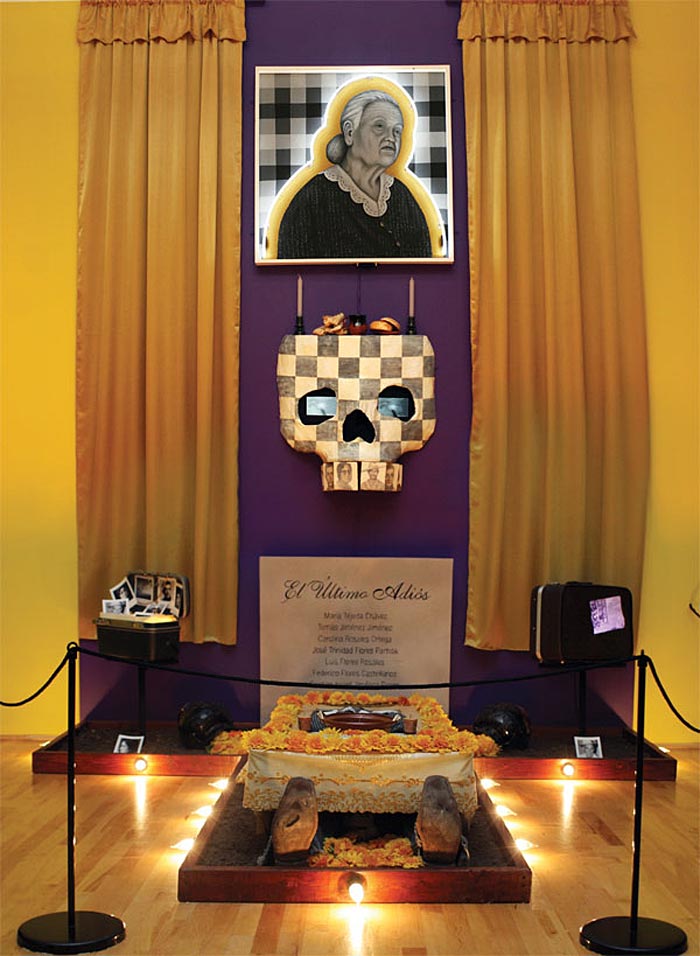 Born in Jalisco, México mixed media artist Salvador Jiménez is not afraid to put politics back in art. “My work is a documentation of my perspective, the different things I’ve lived through since I’ve migrated to the states. Therefore a lot of my work relates to immigration, to adaptation and social-political events. That’s what affects my community and me. Rather than making artwork that would sell and be more commercial. I’d rather create something that’s meaningful to me and perhaps even educate or change someones perspective. I’m trying to create dialogue with my artwork,” says Jiménez as we interviewed at his Yolocali artist in resident studio space in the heart of Pilsen, Chicago. Self-identified Chicago-based artist, Jiménez considers México home and toes the line as an immigrant and activist artist. His art-ivist tendencies stem from his families forced migration from the their farm in Jalisco to the Chicago due to NAFTA. “I was raised in México. What brought us here was NAFTA – The North American Free Trade Agreement… we were actually doing very good… we were not rich but we were having a very good life. And after NAFTA happened the market for corn got really bad and we ended up coming back to Chicago.”

His father, he explains, “was a actually a Bracero who worked in the fields in the U.S. and brought our family to the states before I was born.” However, following the trajectory of millions of bi-national migrant communities effected by globalization, neo-liberal economic ploys and the indifference of repressive and ideological state apparatuses, the Jiménez family returned to México only to have their successful farming community ruined by the effects of the so called “Free Trade Agreements” passed in 1994. The family moved back to Chicago, a new and strange place. Jiménez describes, the difficulties and traumas of being uprooted from his culture, community and language, ” When I first came here I didn’t know what I wanted to do. We cane with the idea of making money and going back. I finished high school here. It was hard for me to adapt to a new culture, language, society. Everything was very hard for me. I didn’t know any English. I didn’t know how to express myself.” 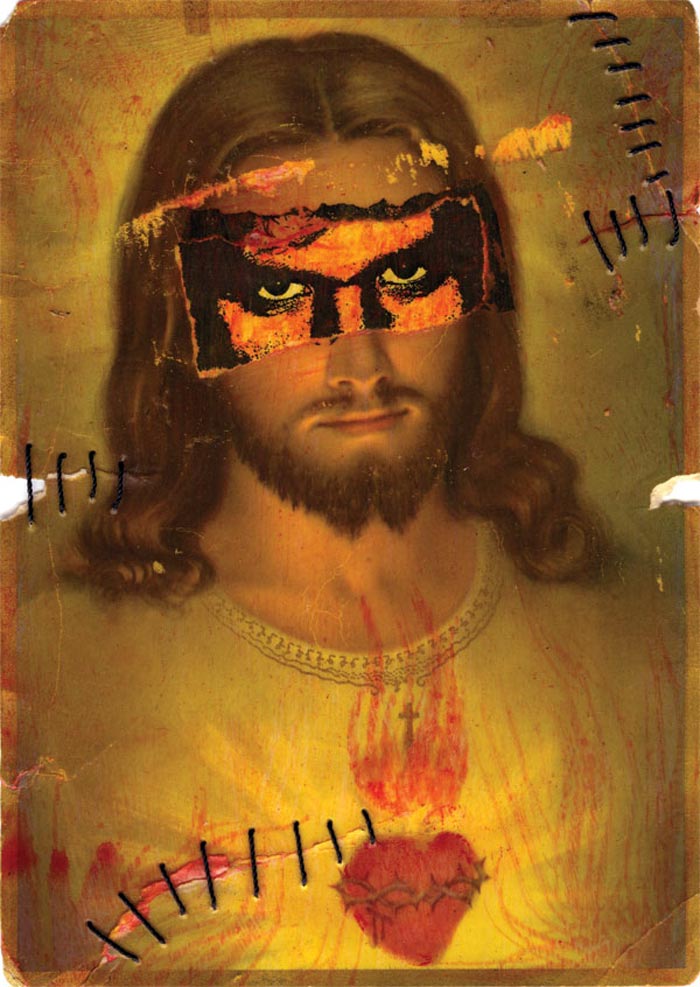 Despite his isolation and struggles with language, Jiménez discovered his talent for self-expression in a since-changed, but historically profound Chicago youth arts program, Gallery 37. Through arts outreach programs similar to Yollocalli, the youth arts program he now teaches for, Jiménez gravitated towards photography and later won 2nd place in a Art Beat Latino competition, garnering him a scholarship he applied towards his graphic design degree at Robert Morris College. He remained an artist in resident there for 2 years and bolsters at the institutions support of his self-discovery and exploration. There he shifted from photography towards the graphic and multi-media arts, exploring self-portraiture and mix-media collage, printmaking and installations that would be the base of his career.

His recent work, exhibiting at Miguel Cortez’ Antena gallery, The Milwaukee Arts Festival and the upcoming Pilsen Open Studio’s, Jiménez’ work ranges from charcoal family portraits, collage, mixed media instillation, and more. His work always personal and rooted in familial “memories and experiences,” constantly, adamantly addresses issues ranging from new technologies affects on sexuality and gang violence. His approach to education, at Yollocalli where he is currently artist in resident and instructing a mural class to young adults aims to empower and enrich his community. His ambition is to engage his community in dialogues about the issues affecting him, his family, his people.

Jiménez work continues a larger discourse on immigration reform, and the injustices suffered by immigrant families constantly torn apart by transnational struggles. His work is refreshingly conceptual and starkly innovative. His themes, though echoing the common impulse for legalization and human rights, stands on its own in artistic skill and scope. Jiménez initially inspired by Dada and Surrealists Marcel Duchamp and photographer Man Ray. Jiménez’ lens, focused on the personal as political and the political as person, holds heavy criticism of the institutions and powers the be, while remaining objectively personal and narrative in approach.

Of his most astounding and starkly political works is the instillation I first encountered at Antena gallery in response to Senate Bill 1070 passing in Arizona. This tremendously controversial and symbolic work, reflects the current state of indifference and ineptitude of US policy and ordure of citizenship rights and processes.

different locations in which my work can be seen for this weekend art walk in Pilsen look on the map to find the location of the numbers.

Other galleries and art shows