It’s a dream come true for twelve year olds: take Super Mario Brothers and combine it with nudity. Throw in a locked door and it’s a pre-teen wonderland that most greasy-haired guys can only dream of. ‘Boobs and Goombas’ is (thankfully) not just for sticky-fingered boys, it’s a fantastic new show that has been playing to cheering crowds at the Gorilla Tango Theater. Set to run only through October, the show has been such a hit that (lucky for you!) November and December dates have been added. 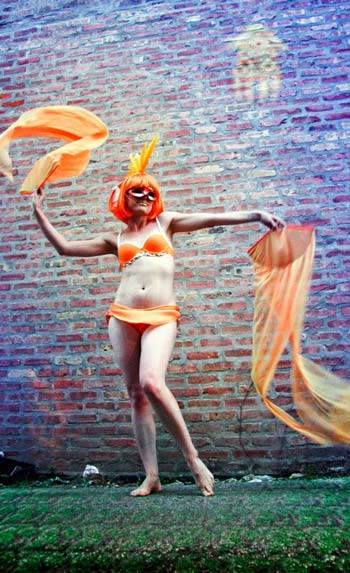 I wasn’t expecting to love ‘Boobs and Goombas’ as much as I did. I was ready for a standard cabaret style burlesque show made up of rotating performances that have little to do with each other (besides the Nintendo theme) with a host acting as ringleader introducing the lovely ladies- a fun show but also nothing really new either. It was a pleasant surprise to find out that ‘Boobs and Goombas’ is an actual, original play with a plot propelling forward amongst the pasties.

Written and directed by the Belmont Burlesque’s multi-talented MsPixy, Mario and Luigi once again find themselves in a predicament in the Mushroom Kingdom. It seems that their constant quest to save silly little Princess Peach has caused their sexual frustration to boil over to the point where everything- from dangerous enemies to the usually androgynous Toad- looks like a beautiful woman. They agree to embark on one more rescue mission into Bowser’s Castle and the fun begins.

Along the way, the traditional enemies get a glam makeover. A Cheep-Cheep turns into a beautiful orange-haired siren who performs an “underwater” fan dance, an adorable Koopa Troopa teases thanks to a cleverly designed turtle shell, the usually spooky trip to the Ghost House turns sexy and even Lakitu floats in and looks startlingly different under that cloud. The burlesque routines are all campy fun with the audience laughing just as much as they were leering.

Sure ‘Boobs and Goombas’ is titillating but, more importantly, it’s hilarious! Stuffed with inside jokes and game references that had the crowd cheering, MsPixy has turned the Mushroom Kingdom on its head. Item-selling Toad (an audience favorite played by Diva La Vida) is now a hyperactive drug dealer with a lisp who gleefully strips off her iconic blue vest. Mario and Luigi (played by Coo d’Twat and newcomer to the Chicago scene Lily e’Claire) still have their over-the-top accents and twitching handle bar mustaches but are sporting some hard-to-miss curves under their overalls. It’s a world where pasties are winking punchlines and chorus lines include Yoshis. All those pasties and Podoboos culminate in a surprisingly awesome (and catchy!) finale. . . but of course you have to get all the coins to unlock the alternate ending.

The hottest show in town, ‘Boobs and Goombas: A Super Mario Burlesque’, continues its run at the Gorilla Tango Theatre (1919 N. Milwaukee Avenue) with 8 new shows including two this weekend: Friday October 29th and Saturday October 30th at 11pm. Gozamos recommends purchasing tickets in advance. The show we saw was sold out (and ended with a standing ovation). See the full schedule and purchase tickets ($15) on Gorilla Tango Theatre’s website.

2 thoughts on “Pasties and Podoboos: A ‘Boobs and Goombas’ Review”