Tomorrow night (that’s October 2nd for those of you not paying attention) Pilsen’s very own Beer Run Gallery hosts what promises to be a fantastic farewell to their homey, Joevanny “El Grafista” Duran by allowing the city’s arts community to, quite literally, Step Inside and take home a piece of what makes this gallery so special and so unique. You should grab a friend and go…you’ll be glad you did! You might even go home with an affordable, Chicagoan masterpiece!

How did Beer Run Gallery get started? How did it manifest into what it is now?
Ruben: It started with a group of guys who wanted a space to sit around and draw. And it turned into: “Hey, let’s get a few more guys and get a bigger spot.” And it turned into five guys and we got a good deal on this space that was way bigger than what we expected. The initial group was four of the tattoo artists that would sketch upstairs at Nuco’s apartment. And, they would always make a beer run before they got started, and that’s how the name came and how we got started.

So, you guys are leaving town? What’s going on with that?
Joevanny: I’m actually moving next week to Miami. And, I just really like what’s going on down there right now. Their art and design district is literally just blossoming right now. Just trying to make it down there in time for Art Basel, maybe not as an artist, but experience the whole process. I’m taking some ideas that I’ve seen here and possibly finding a small place for a phantom gallery, not a fixed location, maybe just renting it out for a month or twoand then taking it to another scene.

Do you feel that it is vital for art, in general, that you’re not stagnant in one place? Taking the art to folks, rather than depending on them to come to you?
Ruben: There’s a long answer to that question. It has to do with Chicago. It’s in a bubble with its own dynamic. It’s hard for things to come in and go out. It doesn’t happen naturally. There’s not an influx and outflux like in other major cities on the coasts. We want to see Chicago artists have that influx and outflux, and that’s what we’re trying to do.

Joevanny: There’s absolutely no doubt that there’s talent here at all. Absolutely no question that they’ll be successful.

Do you think Chicago artists haven’t gotten their fair shake? Are we not represented on the grander scale?
Ruben: I think Chicago artists get their recognition, but the consumer market for the genre of the type of stuff that we do, the type of stuff we’re into, is not as big here as it is in other places. There are lots of reasons for that, and I think just having a graffiti buff as strong as we do played a big role in the psychology of why people don’t spend the money on art here as much as they do in other places.

Joevanny: I think there are two sides to that. From the consumer standpoint and marketability, being able to sell yourself. And then the other side would be that the artists (I don’t want to say give up, but they) find their comfort level and stay within that comfort zone. If they don’t reach out there and explore, and take that risk, then they probably won’t get there.

What do you feel sets your gallery apart from others in Chicago, and in the country? Or even the world for that matter? Just giving you guys a chance to brag on yourselves if you want…
Ruben: I think what we’re doing is being done in other places, but (here) it’s Chicago stuff. This was founded by tattoo and graffiti artists, and there aren’t alot of galleries who show that type of stuff in Chicago, you know, maybe a handful. You go to the East or West Coast, and you’ve got tiers of that kind of stuff from bookstores to high end galleries.
We’re definitely an alternative space here, you know, but I wouldn’t say we’re anything special. We’re just trying to make a place for our people. 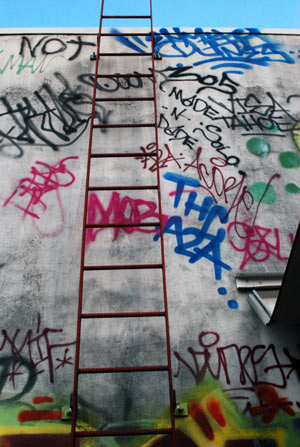 Tell us about the upcoming event: Step Inside.
Joevanny: I thought about this a couple times, different ways to do it, about how to sell some of our stuff, how to make it more accessible to people. People that are interested in our work, but maybe don’t have the money to purchase the work and all that…can. Everything just kind of lined up. My farewell and leaving the city, just decided to get rid of some of my stuff. Just throw a show together, and who better to invite than Ruben and Revise, and Jaci as well. They know how the place works. They kind of are on the same level, I guess, at some point artistically. I think it’s a good combination for a show. We all have our different styles, but there’s that certain point where we all are interwoven. And instead of having a farewell bash, what better than just having a really nice art show with really nice pieces with an opportunity for people to buy it.

Ruben: The title of the event, Step Inside implies more of a casual theme, too. We’re all friends, and that’s part of theme of the show. We just want to welcome people in one more time. That’s where the title came from.

(Laughs) Oh man, least favorite…definitely have to be segregation on all levels: race, artistically, everything. You can go from A-Z. Segregation is just one of those things that…**insert puke noise here** Favorite thing? Man, too many things…

Ruben: I think I’m gonna change mine to loyalty.

Joevanny: Loyalty is your least favorite?

Ruben: No that’s my favorite, man.

Ruben: Chicagoans are loyal. That could be a double edged sword, though…

Joevanny and Me: Yea, it could be…

Joevanny: They are loyal, so now I have to think of another one for favorite.

Ruben: You could say Daley.

Joevanny: Daley, yea sure. Love the fact that he’s leaving. (Laughs) Too bad he couldn’t leave before me, damn it…No, but I think it’s a pretty good city to live in for part of your life, it teaches you alot of things. Maybe not as big as New York, but you get a good mix of things here and there and just how to deal with people. All kinds of people.

Who are some of your favorite painters?
Joevanny: I think if you call it street art or urban art, I really like David Kinsey. Even though it’s moved on to prints and stuff in galleries, I really like what he’s done. Another painter I really like is Dali. I’ve always liked Dali’s stuff. He’s one of my all-time favorites.

Ruben: All I can think of right now is graffiti stuff, because I’ve been getting back into graffiti lately, but I really like Omen’s and Poe’s stuff lately. Really digging their experiments their doing with graffiti. It’s just really non-traditional. Flex, KOM. Always innovative. Too many to name, man…(That’s who I’m into) I guess as of this week…

Joevanny: As of this week…

What are some short and long term goals, not only with the gallery, but personally, artistically, socially, politically?
Ruben: It’s kind of tough because Beer Run Gallery, like the name implies, is something really simple. We’ll try to keep it going, just growing as individuals, though, we want to keep it going. We’re just taking it one step at a time. I don’t know if there’s a set long term goal for The Beer Run…

When did the gallery actually open?
Ruben: Last October. (of 2009) 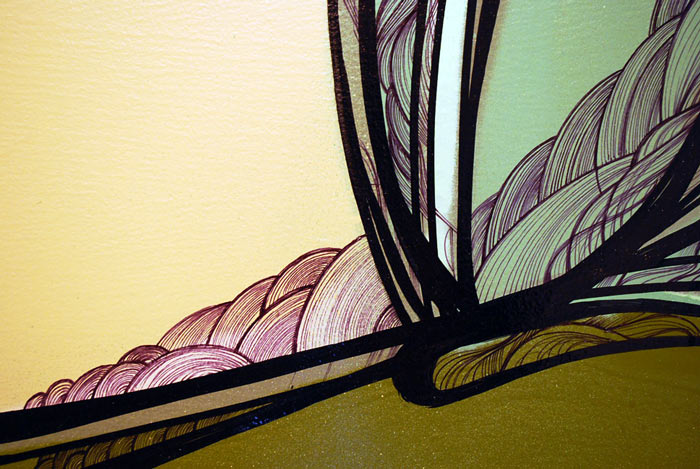 Words of wisdom or advice for aspiring artists out there?
Ruben: Just do your thing. Don’t give up. Don’t stop. And don’t listen to anybody.

How can our readers keep up with what y’all are doing?
Joevanny: I’ll be updating my blog…(Ed Note: elgrafista.com)

What do you want to be known for when it is all said and done?
Ruben: The whole thing for me is just helping people. Giving our peer group a place to show their work., because we know they make good work. I’m not really asking for more than that.

Joevanny: Doing my work, I’ve always felt that I’ve had to push myself to be the example for other artists that are probably a little more talented than me, giving them that extra push. Getting reactions from people through painting, writing a song. That means that it was pretty successful.

What inspires you?
Joevanny: Thinking of Ruben.

Ruben: (To Joevanny) Jerk. What inspires me is people laughing.

Joevanny: Trying to break that norm, that routine. Trying to change things up. And definitely laughing. You shouldn’t go a day without laughing…