Chavela Vargas is an iconic figure in the musical industry known for her illustrious and epic voice. Much like Vargas, Lila Downs’ is just a contemporary legend. Her voice holds the right stance to convey that which she sings. It only makes sense that the good folks who organized the tribute at the Chicago Symphony Orchestra, chose the Oaxácan born songstress alongside, Buika to perform a tribute for the legendary Vargas on October 15. Re-interpretating Vargas’ take on classic ranchera music, with a mix of their own musical styles.

Downs is no stranger to the art of continuously reconstructing classical Mexican songs. The songstress’ renditions of rancheras and other genres have led her to become one of the most critically acclaimed artists in the scene. Earning appraisal from Vargas herself. Downs, spoke to Gozamos about her participation in the upcoming tribute to Vargas, the Mexican Biccentenial and an upcoming album. 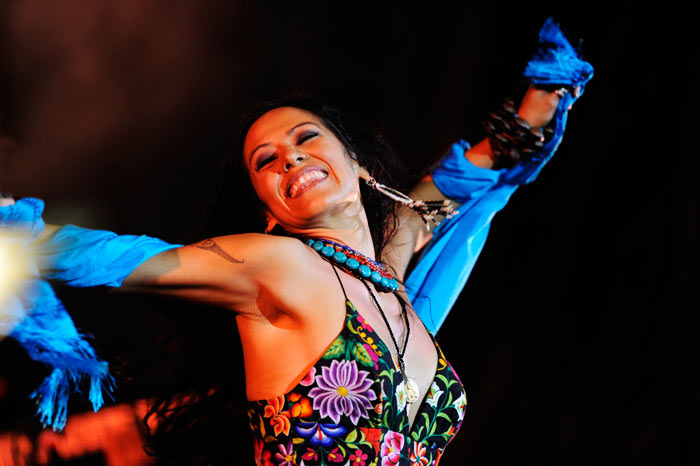 Gozamos: Being that you’re upcoming performance at the Chicago Symphony Orchestra is a tribute to Chavela Vargas, I’d like to know, how has she inspired you as an artist?
Lila Downs: She’s a very strong character in our musical history, she speaks with honesty and comes from a time where you really had to fight and scratch for some respect as a woman. Of course her sexuality was always in the open and I think that it was a difficult time for people to accept her. So I think she lived a very interesting life, she was always a strong woman.

G: Did you volunteer for the tribute or were you asked to perform?
LD: I think it was originally an idea from the Chicago Symphony Orchestra, Buika will be doing her own versions of the songs Chavela used to sing and I will be doing others.

G: A couple of years ago, Vargas and yourself worked on the set of Frida, did you get to meet her then?
LD: I didn’t get to work with her on the film, we both did our own segments in the Frida film. Then I got to know her when I was in Spain one time, I accompanied her on the guitar and we had a very wonderful time together and she got to know me. I guess she likes me, because she’s not a very easy person to approach and I’ve loved her, [because] she’s great and so this was my personal experience with her. I have been part of different tributes to her where she has been very kind to me and given me a lot of compliments.

G: Is she aware of the tribute and has she commentated it to you?
LD: No, I don’t know if she knows about this one, she has a lot of tributes made for her. Several, in the year so far. We just did an album where she invited me to do a duet with her in México. I believe Buika as well did an album dedicated to her. [Buika and I] both have in some way a relationship with her music.

G: Did you take part in the recent festivities of México’s biccentenial?
LD: We had a concert the night of the 15th. Participating along with 15 other artists, in different parts of the city. I performed songs from our previous albums, I just put an album out, La Misteriosa y Lila Live en Paris. We did songs from that album but also some new songs that will be on our next album which will have some classic Mexican songs. Some of which Chavela used to sing and also some originals that I have written about Mezcal which is a traditional beverage from Oaxaca. [I also sing] about tortillas, sins and miracles.

G: How will you interlock her music and make it sound like yours?
LD: [Vargas] does acoustic versions of her music very minimalistic guitar and just a harp. We do the same, I love to do the ballads or rancheras. The very slow rancheras with the guitar,  playing the guitar and the harp and maybe the bass. I may add other colors, or ask someone to play a horn line. I think it all depends on the artist and the interpretation you choose to make of their interpretation.