America hasn’t always been a nation of wine drinkers. This bleak period in our history started to end with the Judgment of Paris in 1976 when a lowly American winemaker beat out the best wines of France in a blind tasting. While an impressive feat, the American palette was anything but with their leanings toward the sweeter varietals White Zinfandel and Chardonnay. Like babies born with a preference for sweeter foods and drinks, this was where we were developmentally – the equivalent of babes ignoring the spice, savor, and complexity the wine world offered. Things changed rather quickly after a Morley Safer report care of the television news magazine show, 60 Minutes on November 17, 1991. Within a week, sales of red wine rivaled those of their sweeter kin. Even before this, however, we knew about crush. 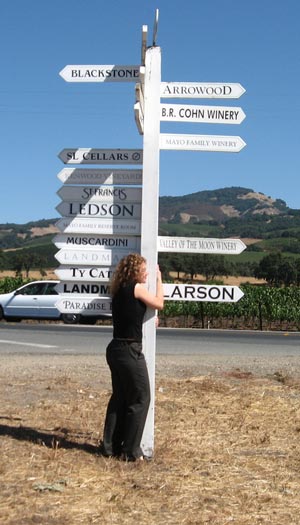 It’s an iconic image: Lucille Ball and another woman stomping on grapes, crushing the grapes. The image is as familiar as Eisenstaedt’s V-J Day photo of the sailor kissing the nurse in Times Square or even covered wagons indicating Americana. What might not be as well known involves what another American icon used to say, “The rest of the story.”

My journey involving the details surrounding Lucy’s “Grapola Pungente” began about a month ago when I stepped foot for the first time in real wine country. True, each state in the country can now claim to have actual wine country within their realm. Unfortunately, the vineyard near Volga, South Dakota never left me feeling the way I felt when I visited my first California vineyard, Chateau St. Jean.

Awarded best wine of the year by Wine Spectator for its 1996 Cinq Cépages Cabernet Sauvignon, Chateau St. Jean continues to garner comparable prestige and acclaim. As soon as I noticed how close we were to this hallowed ground, the decision to make this our first stop looked more like the decision a heart makes when deciding to beat: involuntary.

To call the actual estate well-manicured is like referring to a Merchant-Ivory film as pretty. Actually, it looked more like they had a conservative version of Edward Scissorhands on staff. Hedges worthy of British jealousy bordered walk paths and provided sanctuary in seating nooks. And let’s just get this out of the way: I love hedges. True story: I once sat in on a discussion of The House of Lords in which one of the lords shared an experience about a neighbor suffering a heart attack from the stress caused by another neighbor’s untrimmed hedge. Anyway, from hedges to an architecture of French and Spanish influence, the Chateau St. Jean estate was everything I had imagined and more. The reserve tasting ($15) did not disappoint either. One thing I didn’t anticipate, however, brought me out of my euphoric haze: a barren vineyard.

“Oh, that’s phylloxera,” went the tasting room staff. Up until then, I thought American rootstock was impervious to this bug. Evolution knows no bounds, unfortunately. Thoughts of bugs and pulling vines kept churning in my head, distracting me from the very important work of wine tasting including this somewhat lesser-known grape, Viognier (pronounced vee-uhn-yeah) that had a creamy, oily texture – in a very good way! – with an incredible herbal quality that’s usually found in gin along with lime and floral and all sorts of lovely complexity. Haunting as it was, I couldn’t stop staring at this patch of brown soil amid the fertile and healthy vines.

Later, I kept thinking about the process of it all, that in the end, we had left not just a very beautiful farm, but a factory as well. The grapes I had just plucked from the vines and eaten – yet another first for me – would be hand-picked and crushed. From there, the juice would be fermented, aged, bottled, and aged some more. Only then would the harvest leave that most enchanting farm, the vineyard and its estate.

I come from a family of farmers. We even homesteaded the land which we still farm today. For many years, then, have I endured harvest. Working until dawn in the fields, waking up every couple of hours to check the corn dryers, moving cattle on foot from the summer grazing lands to now empty fields, I know the battle of harvest and all its ambient. What I hadn’t known before, however, was the battle of crush. I still don’t quite know it as I’ve never endured its gruel. But like so many wonderful things wine has done for me, it has allowed me the space to imagine a different type of harvest called crush, one slow sip at a time.