“My father came home one day and heard someone playing the piano. I was playing with both hands, really playing! Harmonizing and everything! He questioned my mother and grandmother about who had been teaching me to play, and they answered that I had taught myself just from watching him”. Chucho Valdés laughs as he tells the story of how renowned Afrocuban pianist Bebo Valdés discovered his son´s talents – at the time, Chucho was not quite three years old. 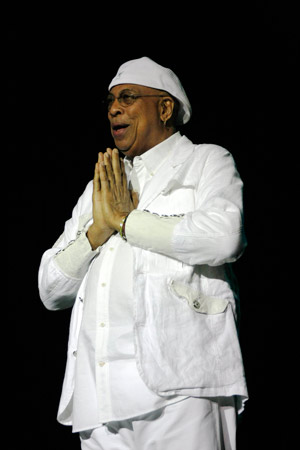 Valdés says that from those days on he has never been far from the piano keys. Sixty-five years later, the now legendary pianist, composer, arranger and bandleader has been awarded three Grammies, founded Irakere, one of Cuba´s most influential Latin jazz bands, and remains a beloved member of the revered Afrocuban musical dynasty that includes father Bebo, sister Mayra, and his own son Chuchito.

Speaking from his home in Cuba, Valdés shares his excitement at his latest musical project: a new CD called “Chucho´s Steps” which was recorded with a recently expanded ensemble – from a quartet to a septet – and with a new name: the “Afrocuban Messengers”. The CD, he explains, is a series of homages to jazz greats that influenced a path which he feels is now moving in a new direction. The name of the band references Art Blakely, inventor of modern be-bop drumming, and his Jazz Messengers; the title of the CD is itself a homage to jazz legend John Coltrane, for his “Giant Steps”; The tune “Zawinul´s Mambo” honors keyboardist Joe Zawinul, one of the first jazz musicians to incorporate pre-recorded sounds into his compositions; and an extraordinarily beautiful piece titled “New Orleans” is Valdes´s ode to the city of good friend Wynton Marsalis and his family.

Valdés waxes eloquently and enthusiastically about this last song, detailing for me the connection between Havana and New Orleans. These cities´ intertwined musical roots begin with the arrival of Haitians to Cuba as of 1804, and with them, he explains, came the salon dance of the contradance, which was also popular in the French colony of what is today Louisiana. It was the contradanse´s embryonic musical cells that would develop into ragtime in New Orleans and the Habanera genre in Havana. Valdés also declares that as an honorary citizen of New Orleans (he was proud to be declared so by the Mayor in 2000) he wanted to write a song of support for the city that had suffered so much due to Katrina.

However, the fundamental point of structuring the CD in honor of the musicians that had influenced him along his path, says Valdés, is to mark that his steps are taking him along a road less traveled in terms of Latin Jazz. Incorporating asymmetrical rhythms in an amalgam wth Cuban polyrythms,Valdés´s current CD witnesses to a much greater extent the musical legacy of Africa in Cuba. Taking the percussion beyond drums, congas and bongo, his new compositions incorporate the batá (drum played in the religious practices of the Yoruban land in Nigeria and by devotees of santería in Cuba, Puerto Rico and the U.S.A.) and Dreiser Duruthy, the batá player and one of the members of the expanded quartet, even adds Yoruban chants and dance to some of the pieces.

Batá drums are used to communicate with Yoruban deities in their own language, in rhythms which allow a direct dialogue with the divine. Now added to the musical vocabulary of a maestro such as Chucho Valdés, they no doubt ensure that the concert at Symphony Hall be a truly transcendent experience.