Hip Hop duo, Atmosphere has come a long way since their first EP, “Overcast!” Since, they’ve released six albums and various other side projects such as Felt. Slug’s lyrical techniques and Ant’s accompanying Blues and R&B-esque productions help balance the nostalgia in their newest EP release, “To All My Friends: Blood Makes the Blade Holy.” The album, released in early September works as a collection of EP’s the duo compiled while on tour. “After the last tour at last minute we decided why not put both EP’s in vinyl only and then put them on one CD together like we had done before, with a collection of songs called ‘Lucy Ford’,” says Slug.  The twin cities native,  spoke to Gozamos about their tour, “To All My Friends” making a stop in his second home, Chicago. 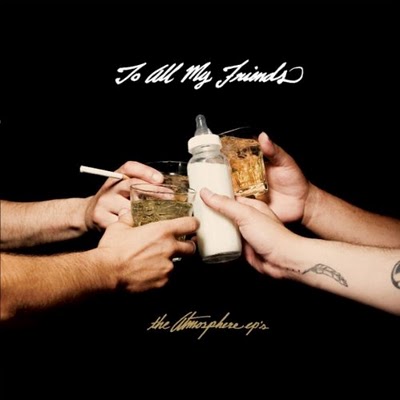 Gozamos: This album seemed more mature, in comparison with the groups previous albums. Do you feel you’ve grown along with your music?
Slug: It does. I think that part of that might be that we are influenced by our surroundings, that we are all getting older and priorities start to shift. Sometimes you realize that getting wasted at the bar isn’t as important as waking up and making breakfast for your family, so I think that it’s […] not so much that there’s an ‘attempt’ to a musical shift or anything. I think the music might just be shifting and evolving with us as we evolve as people.

Gozamos: What do you feel about being one of the most accomplished non-commercial artists from the Midwest in the U.S.?
Slug: I don’t really. I don’t know how to explain what it’s like to be [that sort of artist].

Gozamos: Fans compared your music to that of Eminems, arguing that you’re a better artist. What’s your take on the subject?
Slug: I think the only reason people compare us is because of [our] skin color and the location, you know he’s from Michigan and we’re from Minnesota. I don’t really think we’re the same type of rapper you know, I never really did. Even when we first came out. I am a fan of him, but I have to be in the mood for that type of music to listen to it, just like I might be in the mood for Tom Waits, I might listen to Tom Waits. Just like I might be in the mood for Mobb Deep, cause I listen to Mobb Deep and so I don’t really think there’s a comparison between him and me. I think that I’m more selfish about what I do. He might reach lot more people and speak and communicate to a lot more people. I’m a little bit more selfish, I make songs for me. I hope that people like them, sure. I make them for me. I don’t always make them to communicate to a bunch of people.

Gozamos: So you do it all for you? Everything’s for you?
Slug: You know at the end of the day it’s all for me, yeah. It’s what I write, what I choose.
Just like what Em does. He does it for him, he does it to make himself happy. Or he does it to challenge himself. Just like I do what I can to challenge myself or to make myself happy.I don’t think it’s necessarily a bad thing or a good thing. It’s another way of doing things.

Gozamos: Many musical artists release follow-up albums and fail to out-do themselves. Atmosphere has in fact evolved to become one of the best rap-duos since your arrival to the music scene.
Slug: That’s because our fans evolve too. Opinions based off my music comparing to another artists music is your own wants and necessities with art. It’s a hard thing with people, its hard to say that this guy is better than that guy because its all based on personal preference and you might not share the same personal preference. At the end of the day you’re both right. I think it is just a matter of what you look for. Some people challenge themselves and constantly look for a better film, a better book, a better record. Whereas some people use music the same way they use film and music. Some people use music just to take their minds off of their problems. Some people use music just to dance. Some people use music just to listen to it in their car, when their driving back and forth from home to work. Music is a very hard thing to argue, because everybody has their own use of it. A different relationship with music.

Gozamos: You’ve shown pride in being part of the Midwest and have made a spot for us in the market.
Slug: There’s a few of us that have done that. Eminem definitely puts us on the map, P. West, even Nelly, Kanye, Common, No I.D. and Rhymefest. These people all put the Midwest on the map. It’s funny because when I go to places like Florida, people ask me if I’ve ever met Kanye West and it’s like, “no I haven’t he’s über famous, he’s a star!” But in Florida, they see the Midwest and think all the artists coming out, they think it’s a network and that we all know each other.

Gozamos: Speaking of networking, would you like to work on a side project on your own or as a group collaborating with other artists?
Slug: The only projects that I’ve ever aspired to create, are always with friends. I probably will make other projects here and there, little pet projects, but it will always be with people that I’m friends with.

Gozamos: Is there anything you want to throw out there for your fans, or for the general public?
Slug: I want to give a shout out to Rhymefest, that dude is my dude. That dude is a gem in Chicago, you guys got a real diamond.