Throughout American history we have been in love with heroes. Now society is centered on self– self-gratification, self-motivation, self-indulgence; it’s been a driving force for Americans for decades. As a result, we are witnesses to the slow death of the hero. Today I want to tell you about how we define what a hero is. During World War II, relations between the U.S. and Mexican immigrants were more favorable. Many men in the United States were enlisted in the service, and there was a desperate need for workers to fill jobs. Of course, we all know that many women stepped up to the plate. What many don’t know is that America opened its borders and encouraged Mexican immigrants to assist on the work front. As a matter of fact, that’s how my grandfather came to America. He came here to work during World War II and decided to stay and raise a family here. After years of working with dry ice, he now feels pride for helping the country that gave him so much. Slowly America started to gather a much larger Latino community as a direct result of the need for labor. Things have certainly changed, as now some Americans resent Mexican immigrants taking their jobs.

More than just workers came over that border during that time. Soldiers came over to assist with the war effort. One of the most notable and talked about soldiers is the hero known as Charlie Foster. I know that sounds like any other name given to a normal American. What if I told you his actual name was Carlos Faustinos? Much like immigrants who came to Ellis Island, his name got a little tweak while coming to America. This is not so uncommon, as many Mexicans change their names to fit in a little better. Remember Ritchie Valens, once known as Ricardo Valenzuela? How about Psych’s star James Roday, whose real name is James Rodriguez? What’s in a name after all? The actions of a man is what truly defines him. Carlos was an ace flier, which is a fighter pilot who has destroyed five or more enemy aircraft–without a doubt, a monumental accomplishment for any pilot of any race. Carlos served with the 201st Fighter Squadron. He proudly battled alongside the American airmen in the Pacific. His bravery and actions garnered him the Congressional Medal of Honor.

Mexico organized the great 201st Fighter Squadron when it declared war on the Axis powers on June 11, 1942. The squadron was a select group of exceptional Mexican pilots with Carlos Faustinos amongst the ranks. Thirty-five officers and 300 enlisted men received extensive training in Mexico. The pilots then were sent to Pocatello Air Base in Idaho to be given additional training by the U.S. military. These pilots managed to destroy machine gun nests, drop 181 tons of bombs, and made significant progress in the war. These pilots proved themselves to be valuable assets to America with their skill and bravery. Seven of their pilots were killed in action, a sacrifice that will not go forgotten. 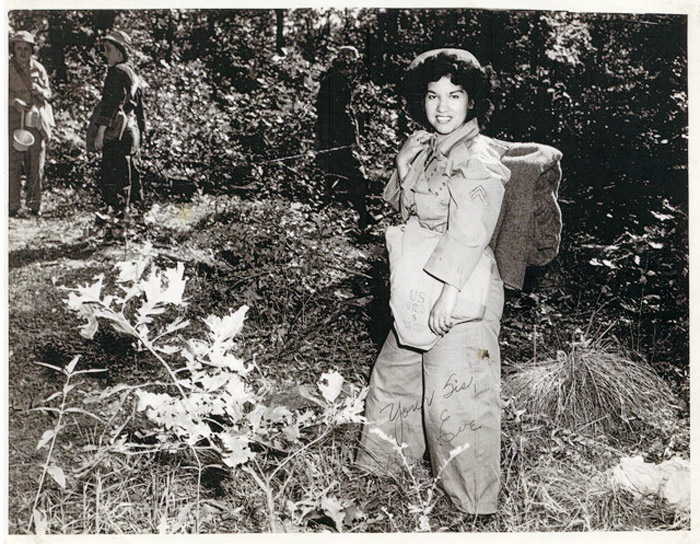 Puerto Rico played an important role as well in keeping America safe during the war. Puerto Rico sent troops known as the 65th Infantry to Cuba to guard the airfields. In 1943, the 65th Infantry was sent to Panama to protect the Pacific and the Atlantic sides of the isthmus and the Panama Canal, critical to oceangoing ships. A Puerto Rican induction program began, which saw an influx of Puerto Rican troops.  Many of the American troops who were guarding the home front could now be sent towards the front lines.  America used many Puerto Rican troops to help in the effort. Agustin Ramos Calero was a member of the same 65th Infantry.  In 1945 his infantry company engaged in a memorable battle against a squad of German soldiers in what is known as the Battle of Colmar Pocket. Amazingly Calero attacked the enemy squad, killing 10 and capturing 21 before being ultimately wounded in action. Calero was awarded the Silver Star Medal and gained the nicknamed “One-Man Army.”.He was wounded four times during combat in Europe. Calero has been awarded 22 decorations and medals for his extraordinary service, making him the most decorated Latino soldier in the U.S. military during World War II.

Latinos have definitely played a vital role in keeping America safe during World War II. Some might even say that they were a major deciding factor in winning the war. Sergeant Fernando Bernacett from Puerto Rico was sent to guard the atomic bomb as it was transported to Japan. The very weapon that changed the world and insured victory over Japan. In a town of Silvis, just west of Chicago is a street called Second Street.  Over 105 Mexican Americans served in World War II from that one street. The Sandoval family from Second Street sent thirteen boys to war. All thirteen were tragically killed in action. Now because of their magnificent sacrifice, Second Street was officially renamed to Hero Street USA. There sits a monument commemorating their bravery, with each of their names engraved. For all their bravery and courage, I give these men the utmost respect. Maybe one day some film or history channel special will document and immortalize their heroic legacy. Until then I honor them the only way I can, by letting you all know of the bravery of these heroes.

2 thoughts on “Latino Heroes of WWII”