Bio pics usually abide by a formulaic outline. A lead actor (in search of an Oscar) does a dead-on mimic of the late-great bio pic’s subject featuring a poor/difficult childhood, a candy-coated rise to fame, an inevitable set back/addiction, and a triumphant comeback (see: ‘Walk the Line’, ‘Ray’, ‘The Aviator’, etc.). They’ve become as predictable as clockwork and (although entertaining) devoid of real passion. Actors turn in good impressions of dead celebrities (i.e. “He sounds like Johnny Cash!” “He looks like Ray Charles!”) and are rewarded for their lack of depth come award season. 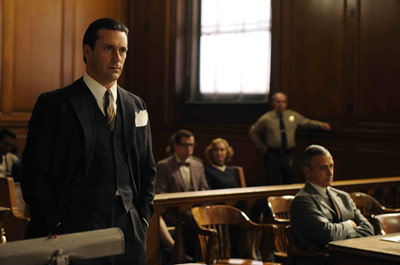 ‘Howl’, on the other hand, is a bio pic that breaks all the rules beginning with James Franco’s masterful portrayal of the great beat poet Allen Ginsberg. Franco’s embodiment of Ginsberg is achingly authentic. This isn’t a (well-intentioned) impersonation that would be at home in a Vegas Legends show. He didn’t just slap on a wig and a funny accent and call it a day. Franco’s Ginsberg is ecstatic, depressing, haunting, and contradictory. In other words, this Ginsberg is human. Once again, James Franco proves that he is one of the greatest living actors. His willingness to bring an honesty to all of his roles (well, maybe not Harry Osborn) gives them a profound humanity that translates through the screen again and again.

Besides James Franco’s portrayal of Ginsberg (though the movie would be worth the $10 just for that), ‘Howl’ is a great piece of story telling. It thankfully shies away from the expected chronological pacing of a standard bio pic and uses Ginsberg’s poem as the reference point for the action. It’s broken into three parts that are edited together in a well-paced collage. Part one is told in flashbacks (filmed in black and white) and shows Ginsberg as a young artist trying to find his voice and penning what will become his masterwork. Part two (filmed in color) consists of tense courtroom scenes from the obscenity trial of the publishers of Howl (peppered with great performances from Jon Hamm, Jeff Daniels, Mary-Louise Parker, and David Strathaim) as well as a one-sided interview with a more mature, reflecting Ginsberg in his apartment. Part three is the poem itself. Brought to life in a swirling, gorgeously animated fantasy world and narrated by James Franco as Ginsberg, Howl is illustrated in a way that is not only understandable to those of us without masters degrees, but exhilarating and lovely. All these elements together could be frantic and overwhelming in the hands of a less talented cast and crew but instead the end result is fantastic.

‘Howl’ isn’t just for English majors. I realize it’ll be a hard sell for most of America to go see a two hour movie about a poem, but ‘Howl’ is a swirling, dizzying triumph unlike anything else out there.

3 thoughts on “‘Howl’ Hits all the Right Beats”