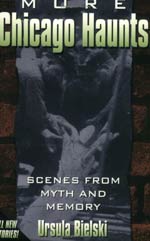 If you love ‘Ghost Hunters’, Ouija boards, and have already picked out your Halloween costume. . .
Next time you find yourself at Navy Pier enjoying the city lights and the cool lake breeze, stop and look around. I mean, stop and really look around! According to Ursula Bielski’s More Chicago Haunts, the tourist hot spot is also a haunted hot spot. Spirits of sailors walk and a ghostly suitor still waiting for his date to meet him are among the ghosts to be seen lingering after dark. The eeriest story is about a plane crash at O’Hare airport in 1979. All 271 passengers died, yet residents heard banging and moaning at their doors and windows right after the crash occurred. Survivors? I think not! Over a hundred reported incidents were recorded with the same story reported each time. When the doors were opened, and the shades pushed aside, no one was ever there. Was it the passengers of the plane? Just maybe it was. With over 40 stories about Chicago’s haunted streets, you’ll be sleeping with the lights on and wondering just how haunted the city really is. 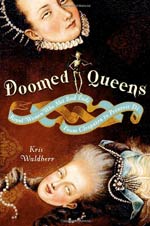 For cool kids who secretly stash a Renaissance faire costume in the back of their closet. . .
Doomed Queens by Kris Waldherr takes you on a trip from biblical times through modern times with stop offs at the Middle Ages and the Renaissance. This book displays no sympathy for the dead queens it talks about. If it were not a plague, poisoning, or child birth causing your death, it may very well have been murder, burning, or the guillotine. The book spares no gruesome detail as some of it’s subjects weren’t lucky enough to have their heads swiftly chopped off you were with the first axe strike leaving you still very much alive to experience the agony. Doomed Queens takes you through the lives of dozens of queens letting you get to know each one very personally. From the famous Marie Antoinette to Anne Boleyn, this book shows how it was (and still is, in a sense) a man’s world. This book goes into detail about the deaths of what were once called queens but, in reality, were just women at the mercy of men. Being of royal blood never looked so grim. 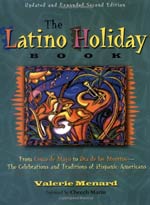 For those party animals ready to start the holiday season. . .
The Latino Holiday Book by Valerie Menard was a treat to read! It’s a great way to get ready for the upcoming holidays. Packed with fun facts, great recipes (my favorites include tamales and hot hot salsa) and how to crafts (homemade pinatas and alters, anyone?), you’ll be making sugar skulls for El Dia De Los Muertos along with paper mache skeletons in no time. With beautiful prayers in Spanish and English for Christmas, this awesome book goes on to tell you how every Hispanic culture celebrates the birth of Christ. From Mexico to Cuba, this book shows how unique each one of our holidays are and how they represent different Latino countries. It’s a history book on holidays with some tequila, salsa, and rosaries thrown in for good measure.