“A nation is a society united by a delusion about its ancestry and by common hatred of its neighbors.” —William Ralph Inge (1860-1954). Author, Anglican Priest, Professor of Divinity at Cambridge, Dean of St. Paul’s Cathedral

While we’re quoting people, I think a wise man once delivered a message from the big guy upstairs. Something like “Love thy neighbor.” Right? I can’t tell if that’s something people in this supposedly Judeo-Christian society still believe–or were ever really taught. Considering today’s political climate, “Love thy neighbor” seems to be little else than some phrase I once heard uttered by a zucchini with a goatee in an episode of Veggie Tales. To live in peace with those around you looks like fiction more and more. Today, a sizable number of Americans choose to look upon their neighbors with fear and suspicion. Whether these Americans are challenging their neighbors’ freedom to assemble in their respective houses of worship (or community centers, as it may be), whether they are deciding who you can and cannot marry, or whether they are calling immigration on you, there is one thing for certain: lots of people are totally freaking out.

Many Americans are looking at their neighbors–both those within the US and those south of the border specifically–with disgust and unbridled hatred. These Americans have lapped up the anti-immigrant messages spewed forth by mainstream media’s star fear-mongerers and Internet crackpots–and, increasingly, democratically elected officials and other political leaders. Congressman Louie Gohmert (R-Tex) recently sounded a public warning that immigrants are coming to the US to commit acts of terrorism–through the beautiful miracle of childbirth. Instead of terrorists sneaking into the country, they are now coming into the country posing as the common undocumented immigrant. Their mission is to assimilate, settle down and raise future terrorists: sleeper cells comprised of “terror babies.” No joke. I am of the opinion that this Gohmert character is what clinicians would call good old-fashioned crazy. He either truly believes this conspiracy theory or believes the public will buy this crock. Hopefully, he is the lone madman here. Otherwise, what does this say about the voters who put him in and keep him in office? 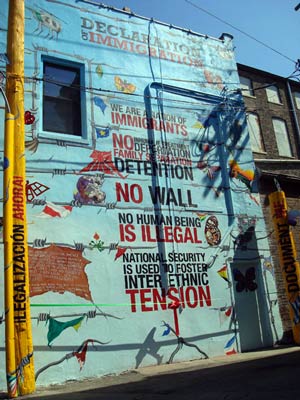 Meanwhile, at Crazytown Headquarters, also known as Arizona, Governor Jan Brewer went on CNN to defend SB1070 saying it’s the best solution to ending their illegal immigration problem and associated ills: drug-trafficking, kidnappings, extortion, and beheadings. Yeah, you read that right. Beheadings. Second to the flaming car bomb, beheadings are most synonymous with terror. And, Americans are willing to gamble off just about all their rights and ideals in the hopes of securing protection from terrorism. I’m guessing this is what her pollster advisers must have told her, at least. It went like this: “Jan, our survey indicates the word beheading elicits an uncontrollable physiological fear response in 7 out of every 10 Americans. The word that elicited the strongest fear response was Islamo-beheading, but our legal team says we can’t go there….” So far, unsurprisingly, Jan’s claim of immigrants executing beheadings remains unsubstantiated by Arizona law enforcement. Surely as the fear mongering continues to grow, so too will the fear. Undocumented immigrants are bringing crime in the form of beheadings and little bouncing bundles of terror. Maybe Texas and Arizona will soon pass legislation requiring all babies to carry ID at all times.

The undocumented immigrant is also being blamed for the crumbling economy. From the supposed stealing of jobs from American workers to the questionable claim of drains upon Social Security and other programs, many would have us believe undocumented immigrants are behind the demise of the American economy. Positions like these are typically championed by bottom-feeding politicians looking to mobilize the average disillusioned American worker. Nevermind the six billion plus worker pool now afforded to profit-driven corporations by the spread of globalization. And, nevermind the portentous worldwide rumblings of a shaky capitalist financial system. Immigrants are taking your jobs! The National Socialist Movement is one such political force juiced up on anti-immigrant sentiment. The Neo-Nazi National Socialist Movement staged a march last weekend in Tennessee in solidarity with supporters of SB1070. One marcher interviewed in a video posted on ThinkProgress.org offered this, which is more than likely the same simplistic view shared by his Neo-Nazi brethren, albeit censored of slurs and hate for the camera:

“Nobody wants all these illegals here. It has to do with the recession and the more that come here, the more American jobs they take. When we stand here, we stand for the American worker.”

Immigration fears–and in general, fear of anything that isn’t white–is also a central component of the Tea Party platform. The Tea Party claims racism is a non-issue within their ranks. They maintained this story even as prominent Tea Partier Mark Williams penned a supposedly satirical letter from Benjamin Jealous, President of the NAACP, in which he asks President Lincoln to bring back slavery so he can be a slave again–presumably because people of color can’t handle the burdens of living in the truly free America the Tea Party envisions. In the letter, Williams makes mention of all “coloreds” living for welfare and wanting big screen televisions. If not racist, the letter is plainly ridiculously ignorant. If his views do not speak for the rest of the party, then perhaps we can draw more accurate conclusions from observing the average Tea Partier at a Tea Party rally, no? Well, accounts from those who have braved the hate-fests report that it is not uncommon to see, and hear, your average Tea Partier accent their lovely, never misspelled picket signs with racial and homophobic slurs.

The desire to work honestly and earn fairly, in peace, is the common denominator among all past and present waves of immigrants. The current wave of immigrants from Latin America is no exception. But, in addition to the typical hurdles faced by all immigrants like language barriers and securing safe, gainful employment, immigrants from Mexico–and others from Central and South America by virtue of also being brown, sharing a language and religion (thereby making them indistinguishable from Mexicans in the eyes of many people)–are burdened with the task of overcoming obstacles other immigrants did not, do not and will never have to face. Geographical proximity to Mexico has given America an advantage when it comes to perfecting transgressions against Mexicans and Mexican-Americans. A history of war and conquest in the Southwest left many people of Mexican descent with the status of illegality in lands once their rightful home. Many Americans during the Great Depression placed an undue weight behind the impact Mexican immigrants had on taking away jobs from American workers, just as they do today. This became a key factor in a decade-long effort by the US government to rid the country of Mexicans during the Mexican Repatriation Program (1929-1939). American citizens of Mexican descent were also sent to Mexico, a truth obfuscated by the word choice of repatriation. A couple decades later, Mexicans were rounded up yet again during the charmingly named Operation Wetback. The Mexican immigrant–and consequently, the American of Mexican decent–has a complicated relationship with America that is built on a unique, clearly unresolved, bloody, sweaty, tangled mess of history. To add insult to injury, fearful Americans wish to whitewash this history, as evidenced by Arizona’s ethnic studies ban and curriculum and textbook revisions in places like Texas. So, today’s Mexican immigrant–and by association even if only for looking the part, Latino immigrant–is both victim and perp. He is charged with ruining the economy, posing a threat to national security and taking down American culture. Charges than have been brought against him time and time again. A sentence seemingly without end.

Soon, though, the time will come when the fearful, hateful contingent of Americans that are snapping off today will be truly outnumbered. Including children in the total population counts, in just over a decade, minorities will comprise the majority of America. The fearful and agitated Americans among us see current immigration trends–and, more generally, changes in the racial demographics of this country from their hometown all the way to the White House–and they decry the loss of American culture. Add to this gay marriage debates and Islamophobia related to the perpetual War on Terror and you have a set of people feeling threatened and agitated. They care not that culture is, by definition, constantly in flux. From a broad sociological and anthropological perspective, culture is the way a society shares and categorizes collective experiences; it’s a way people create expressions of shared ideas and values in a specific time and space. As time moves forward, experiences will, of course, change and new expressions will be created. So, too, will music, art, language and law change. It is the essence of growth. Everyone in all cultures must adapt to change when it comes, as it is the only way forward. These people who fear the loss of American culture and values are, if not unjustifiably resistant to change then perhaps they are irrational and delusional. They are scared of a shift in what it means to be American; a shift in identity–their identity. Some people have no sense of who they are until they tell you who you cannot be.

I liken the violent clamoring among this set of immigrant-hating, equal rights-denying, freedom of religion-rebuking Americans to the final thrashings of a wounded pest. What we are seeing now are the convulsions of a sick and dying status quo. It’s an ugly sight, truly, and most likely ugliest the closer it gets to the inevitable. Making an effort to stay in a world for which it is no longer fit, it continues to flail about in a grotesque, self-indulgent spectacle. It looks more and more pathetic until at last, it ceases to exist completely. In its stillness, we will see it for what it was: something that had its time and has now, thankfully, passed on.

This is not to say that we should just sit back and watch the show with a twisted fascination. The humane thing to do is to help ease its pain; help push it from this world to the next, were it belongs: history. Apply gentle pressure and, at all costs, do not turn your back on it. Likewise, we must not turn our back on our neighbors in need of help and support. Just as the now ubiquitous multinational corporation and international ruling class have been able to grow unchecked in power, profits and influence by disregarding those silly little lines called national borders, we, the common people, must also look beyond national borders and recognize the plight of our brothers and sisters everywhere if we truly wish to empower ourselves to make change in the world. As the spread of globalization rages on and its concomitant iniquities are exposed, we will be forced to recognize the similarities in the struggles of people everywhere–of all ancestries and nations–to simply earn, eat, work and live in peace. An immigrant in our country, legal or otherwise, is just someone who traveled a great distance to get where the non-immigrant woke up. Nothing more, nothing less.

12 thoughts on “Immigrants Are What’s Wrong With America”