The thing to remember about Elaine Benes is that she is, in my opinion, a paramount example of what is to come on the fashion landscape. Julia Louis Dreyfus played the perfect one-of-the-guys kind of girl that dominated pop culture of the ’90s. Throughout the series, she flawlessly went from frump chic to modern business casual, yet still managed to parlay the silliness and quirkiness that was present in the younger looks as she (and her wardrobe) matured.

Elaine Benes’ early style was the definition of ’90s practical. She favored long skirts and rolled down white socks that easily transferred from work to hanging out with her jerk friends. Her use of neutrals was key. Even in her signature floral patterns, that quintessential russet ’90s hue was present (but steer clear from exclusively subscribing to this color). We must not be too keen or quick to just jump a whole period in the fashion landscape. In the early years of the ’90s, even Benes wore the brighter colors, sharper shapes, and tighter fits that had spilled over from the ’80’s. The earlier seasons of Seinfeld were broadcast during a transitional period in between decades that harbored continuing looks and styles from the previous decade- an important fashion lesson that Elaine Benes taught us well. 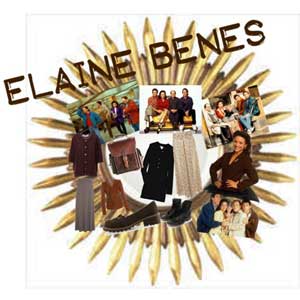 Elaine Benes isn’t the typical fashionista. Some people might find her an odd style icon to emulate. Perhaps Madonna is the first person you think of when I mention “trend setter” and while, yes she was very important, I’ll let the Lady Gagas of the world worship at that alter. Elaine Benes is the approachable style icon. Her white socks and sensible shoes are soft and subtle. Her hair was always pinned back and in its natural color. It’s the overall tone of her very easily attainable look that made me fall head over heels in love. In a lot of ways, I suppose, I am the Elaine of my group of friends. I even do a more-than-killer rendition of her signature bad dancing (it’s always a crowd pleaser). When you revere someone’s personal style, you must first like their substance. However, style comes from substance, so it should be said that from the substance comes the style, like soil to flora.

Speaking of flora, the state of the economy then was similar to our current state, albeit a bit less shambles but shambles nonetheless. The tones of the ’90s economic climate were, as previously mentioned, russet and sepia reflecting the somber mood America found itself in. It took awhile for the explosive ’80s colors (reflecting the booming economy) to leave the collective psyche. As the ’90s ushered in a different economy, so did it usher in a different silhouette. As the clothes began to get looser, the typical frills and daintiness of women’s clothing was painted in a tan color palette. Nowhere was that more present than in the unmistakable ’90s floral patterns that blossomed as the go-to print for the decade. 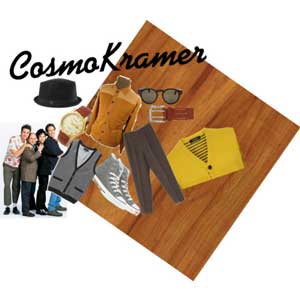 There’s another character from this famed sitcom whose style should also be noted. Cosmo Kramer heralded, in my opinion, the ’50s trend that was later exploited in the movie Swingers. In one episode, Elaine herself refers to Kramer as a “hipster doofus” and words never rang truer. Kramer simply bled that retro cool that unapologetically ran rampant in the ’90s. His bowling shirts, cigar smoking, and his use of similar hues made him (and Elaine) forces to be reckoned with. In fact, I can now see his ’50s influenced manner of dress on the moody and goofy bodies of the sartorially competent young and modern man. His style is a gold standard however, full with aloof kitsch that was at the forefront of the khaki’s movement of the later ’90s (and most likely, we’ll see again in the later years of our own decade). Kramer’s look was not unique to only him, but he wore it best.

What Kramer’s style really is, is the return of casual clothing. His look is also currently relevant because of the “return to simpler times” (at least when it comes to clothes) trend that Mad Men is ushering in. Kramer’s look could be classified as Mad Men casual. Elaine’s smartly assembled business casual look is complete with long flowing skirts whose job is not too elongate but to simply protect legs from the elements elegantly and show a certain amount of restraint. In her, ankle length skirts exist as not just a hemline, but also the economics of failed decadence.

Until next time, don’t be a stranger, but do be stranger.

One thought on “The Indumentarian: A la Elaine y Kramer”