Whether God wanted to wash the sin from the streets or the angels were crying for my spotted liver, I still don’t know. But as we stepped out of that building somewhere on Roosevelt and Michigan one thing was certain…Jim’s lap top was not going to survive.

Jim Day and I were just getting out of the editing lab when the rain started. It did not start with a few pleasant drops or even a foggy mist which would later build to a crescendo. It was The Great Deluge in an instant and sent us running full tilt boogie towards Printer’s Row.

Within a half a block our clothes were twenty pounds heavier and painted directly to our bodies; our shoes became small fish tanks that sloshed and spit water as we ran. Sqush, squish, squishing desperately dashing under awnings. I spotted a refuge just on the corner of State Street and Balbo, The South Loop Club. 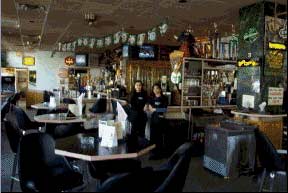 As Jim and I entered the Club dripping and sloshing towards the bar, I had a brief flash as if I were caught somewhere in between a water world in Super Mario Bros. and Fear and Loathing in Las Vegas. I stood just for a second in the bar which was bathed in fake plastic palm trees, neon, Christmas lights and a weird red and orange glow as if David Lynch and Terry Gilliam made Ken Kesey’s day glow farm puke in a room so they could decorate. Hanging in the noise and clinking glasses, Mick Jagger was crooning how he was never going to be your beast of burden over Keith Richards’ slow guitar groove. I knew that this was my kind of gin joint.

Just to pause and get off topic, I dig a good dive bar. Now, many people think that any low class joint that sells cheap booze both early in the day and late at night qualifies you as a dive bar and they’re right. The subtle differences between just some tragic little hole in the wall that time and the Health Department forgot and that diamond in the rough you go to because like Cheers everyone knows your name are in the end, not so subtle.

For me it’s more about the room. It’s the rock ‘n’ roll in the juke box. It’s the pool table that still smells of a billion cigarettes smoked around it. It’s the bartender who’s not trying to talk your ear off for the hope of a good tip. It’s a weird kind of Stray Cat style that draws me to these places, and most of the time not because of the rain.

And this place had that moxie my dear readers, it had it in spades.

We took a seat amid the other saturated skeletons of the night and ordered scotch and sat silent feeling the water from our boxer shorts drip down the back of our legs. “Holy Hell and mother’s milk man!” I recall exclaiming as I remembered my poor phone which was sitting in my cargo pocket. I reached down and pulled it out sure that all I would see was a black screen and later the fifty dollar insurance payment for the replacement. My phone was surprisingly fine, and Jim began to explain how electronics were a lot more water resistant then most people think. “Balderdash, poppy cock and bullshit,” was what I thought, but I instead nodded taking liberal sips of smokey liquor not wanting to either be proved a fool or have to say I told you so. None of that really mattered anyway; I really could care less about the phone and really wondered if Jim’s laptop was as water proof as he claimed or even if the bag it was in withstood the barrage. All I wanted was to sit and wait for the rain to go away so we could get to Jim’s apartment and get dry.

In the middle of our fourth or fifth drink where the wet cloths no longer mattered and the rain gave no sign of subsiding, Jim suggested we leave. “Why?” I asked wondering why he’d want to brave the elements and leave the warm glow of a good hard buzz for the cold and shocking hard jogging drunken dash though the storm that awaited us just beyond the entrance. “Because I have enough balls to do it and soon I won’t feel like running,” Jim said. I had to admit, the man had a point.

By the time we got into the elevator and exited on the fourth floor or Jim’s apartment it began to occur to me (as it may have already to most of you) that we very well could have taken a cab. This was an idea I kept to myself as Jim discovered he needed a new screen for his shiny computer with the fruit logo. I think that the next time I need to get out of rain or just away from the little storms in my own life, I’ll take a trip back to The South loop Club. It had that panache, my friends, it had that quality that is all too uncommon in this fake plastic palm tree plastered society we live in. It was a real place for real people when we needed a refuge from the storm.