Preface for Boston series:
To me, there’s nothing greater than being able to get in an airplane, train, or automobile and end up somewhere completely new in just a matter of hours. To me, traveling is what it’s all about. Earlier this month, I had the privilege of traveling to one of this country’s first cities, the birthplace of The Revolution, the site of the original Tea Party, the home of Paul Revere, Beantown, Boston, Massachusetts. Here’s a snapshot of what I discovered about the Arts and Entertainment in Boston. The overall vibe from a Chicagoan’s viewpoint goes a little something like this:

Street Art
The graffiti ranged across the board. Overall, I thought the work was pretty dope, albeit in smaller numbers, but quality over quantity, right? I’ll let Boston’s graf writers speak for themselves with some photos I grabbed while roaming the streets.

Museum of Fine Art
An impressive collection of work from around the world, the MFA is renowned for its outstanding contributions and displays brought in on a regular basis. While I was there, I got to see Van Gogh’s The Sower (Ed: Van Gogh is one of my all-time faves) which is on display there until August 17, 2010 as part of the MFA’s Visiting Masterpieces series.
I also got to view Cafe and Cabaret: Toulouse-Lautrec’s Paris which will be at the MFA through August 8, 2010.
Those were the heavy-hitting visitors while I was in town, but some of the regulars at the MFA can be seen here:

Kara Walker’s dazzling The Rich Soil Down There was a fantastic finish to my walk through with a giant, explosive mural encompassing the entire 20×48 foot wall. Good stuff, MFA!

Isabella Stewart Gardner Museum
I’ve always been a person to wander the road less traveled, a person to blaze the trail rather than follow one. It was in this personal tradition that I found myself walking barefoot from the MFA to the off-the beaten-path Isabella Stewart Gardner Museum a few meandering blocks away. Now, they don’t allow photos in the museum, so I’ll try to paint a mental picture for all you lucky Gozamos fans out there. Walking in the front door is as familiar as walking into a good friend’s old bed and breakfast. The friend is mad old school, down to the creaky ass stairs and outdoor viewing garden. The friend also happens to own one of the most poignant paintings I can think of, El Jaleo. I usually don’t like not being able to take pictures or entering a certain garden, but I have a new found respect for these types of places since Miss Gardner was such an amazing collector and patron of the arts. Her philanthopic efforts preserving this site are just remarkable.

AIFD
The arts are what brought me to Boston in the first place. My fiance/best friend was inducted into the American Institute of Floral Designers at their annual symposium which takes place with a different theme in a different city each year. This year’s theme: Revolution. The city: Boston. I can’t tell you how proud of her I am, but that’s another story altogether…Featured designers this year included world renowned Gregor Lersch. 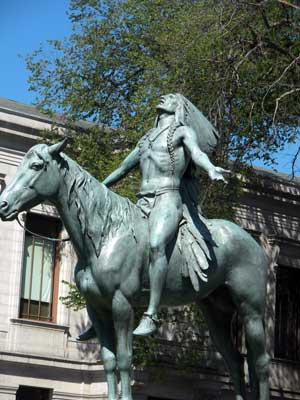 Boston Architecture and Sculpture
The architecture in Boston is just ridiculously historical and awe-inspiring. Here are a few photos of the more dramatically stunning pieces of architecture:

Two sculptures I came across really stick out in my mind, and really made me think about our country’s history, Boston’s role in the development of this country, and where we’re going in the present. The Native American on the horse sits in front of the MFA, actually. The Harriet Tubman sculpture sits on the South End. Think about it…

The crazy thing about traveling for a shorter amount of time is this: just when you start to get to know a city, get to know its vibe, its identity, its inner workings, then it’s time to go back home. I’m just grateful home for me is sweet home Chicago. Boston does move into the Top 5 Cities Visited list though, and I’ll give a glimpse beyond just the arts community as to why Boston will always be a desirable destination. Stay tuned this week for more on Lifestyle, Grub and Pub, and la Cultura of Boston.

Until then: “you stay classy, Chicago.”

2 thoughts on “A Chicagoan Paused in Boston”