Everyone loves to hate the champion, especially when that champion stays good for an extended period of time, creating a formidable dynasty. Baseball fans have the evil empire that is the New York Yankees. College basketball fans have Chicago’s own Coach K and his Duke Blue Devils. On the women’s side, you have the UConn Huskies, who haven’t lost since, like 1983. NBA fans love to hate Kobe Bryant and his Los Angeles Lakers, and NFL fans could do without the incessant references to the Dallas Cowboys as “America’s Team.” When it comes to the world’s most popular sport, I’m sure non-Brazilian futbol fans would like to see the torch passed to any other country.

Seemingly since the beginning of time, Brazil has fielded some of the best teams our world has ever seen. The only country to compete in every World Cup since its inception way back in 1930, Brazil has won an unmatched five World Cup titles. And that record will hold up for at least four more years with Italy, the current champion and runner-up to Brazil with four World Cup titles, being eliminated by Slovakia earlier this week. They have two silver medals (1984-88) and two bronze (1996, 2008) in the Summer Olympics. They have won the Pan American Games four times (1963, 1975, 1979, and 1987). These unprecedented numbers stem from the rich tradition that is instilled in generation to generation: to expect to win it all…year in and year out. The same expectations have been seen in the aforementioned teams from the rest of the sports world. The same hunger for championships has permeated the futbol crazed streets of Brazil for three centuries.
“The English invented it. The Brazilians perfected it.”

If you’ve payed any attention to futbol over the years, you’ve probably heard this famous phrase at one time or another. With it being invented in England, how did the game make its way across the Atlantic to a new land of Brazil? Well, the history and roots of futbol in Brazil is actually somewhat of a mystery. Some say it was Charles William Miller, a Brazilian born scholar sent to study in England, who brought the game back with him when he returned to Sao Paulo around 1894. Some credit a Mr. Hugh with teaching the game to San Paulo Railway workers around 1882 in Jundiai. A third (and less supported) theory has a Mr. John teaching the game to Leopoldina Railway workers in 1875-76. Whatever way you slice it, future Brazilian futbol stars’ influential ancestors were paying attention somewhere in the crowd: 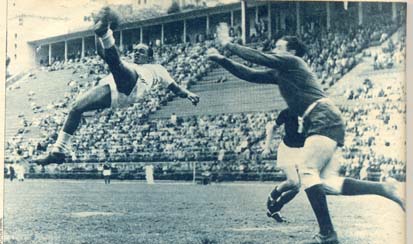 Leonidas “Rubberman” Da Silva
Da Silva is Brazil’s first true superstar, blazing the trail for the rest of the players on this list. Brazil’s top scorer in 1938, he put them on the futbol map, even inventing a little thing we like to call “the bicycle kick” along the way!

Edison Arantes do Nascimento
You may know him by his nickname, synonymous with futbol the world over, the greatest player the game has ever seen, Brazilian national hero, worldwide futbol ambassador, The King, the one and only Pele. The only player in history to be a part of three World Cup winners (1958-62, 1970), Pele leads the powerhouse that is Brazilian futbol tradition.

Manuel “Garrincha” Francisco dos Santos
“Little Bird” is retroactively Scottie Pippen if Pele is futbol’s Michael Jordan. Brazil NEVER lost a match when fielding Pele and Garrincha together. Never lost. Not even once. 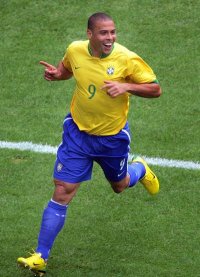 Any team can have individual superstars, but it is up to these superstars to elevate the play of the rest of the team. This is what separates Brazil from the rest of the playing field. Brazil’s futbol superstars care about more than just scoring goals and dancing for the crowd. They care about winning, and that’s the ultimate goal in the art of sport. That and having fun, but let’s be honest: it’s alot more fun when you win, isn’t it? We’ll have to ask Pele and his Crew of Champions when Brazil hoists its 6th World Cup Championship later this month…