Every third Monday of the month, Latina artists starving for some creative release hit a South Side venue for Proyecto Latina, a reading series that showcases established and emerging Latina writers and performers. Founded by Irasema Gonzalez, Diana Pando, and Coya Paz, Proyecto Latina provides a safe haven for writing mavens and recluses. “Every month we feature a different Latina artist, we really put the spotlight on her, and we create a safe space for women to come to the open mic and not have to worry about translating, whether it be language or cultural logistics. You can read in English or you can read in Spanish,” co-founder Gonzalez explains. Proyecto Latina is a one-of-a-kind ongoing series that has carved a much-needed space for Latina voices. “It’s not something you always see in mainstream media. A lot of it gets overlooked, and we just want to celebrate it,” Gonzalez shares.

Each Proyecto Latina night starts off by having attendees rage or release through the Chisme box, a collection of reflections, stress-relieving rants, and often hilarious and raunchy confessions. The spotlight then moves to the featured artist. Proyecto Latina has featured renowned writers, such as Achy Obejas, and local artists, such as Sandra Posadas. The featured act is followed by an open mic session where English mingles with Spanish and where, contrary to popular belief, boys are warmly welcomed. “We’ve also put a big emphasis on spotlighting emerging artists,” Gonzalez explains. “Via the open-mic, we discover new folks.” 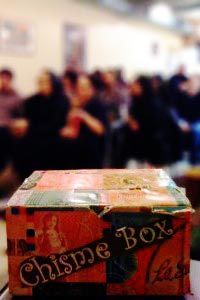 Proyecto Latina has also helped lure shy writers out of their shell. According to Gonzalez, open-mic participants figure, “If I can’t read this at Proyecto Latina, then where can I? This is a safe place.” In fact, once-shy open mic participants have gone on to read at other venues. Gonzalez explains that new readers often take the approach of “Let me test this out in a safe place with ‘family’ before I go out and expose myself to the bigger world.” She emphasizes, “I think that’s important–that you’re able to expose yourself and your work to everybody regardless of background, but Proyecto Latina is the place where we’re really going to make the special emphasis on spotlighting Latina talent.”

Last month’s Proyecto Latina took a slightly different approach and was dedicated entirely to speaking out about Arizona’s immigration law SB 1070. Gonzalez shares, “That night was about the importance of not being muted and about creative responses. How are you going to channel your energy productively? I had an interview with Sandra Cisneros, and she said ‘You have to compost your rage.’ I loved it when she said that. You compost it and you don’t just act on anger. She was talking about art, but to me, it was like we can get mad about Arizona and grumble about it, or we can be proactive about it. I think it’s important for us not to underestimate our collective power. That night, people were ranting and telling stories and testimonies. It was an empowering, cathartic night.”

Operating on a low to zilch budget hasn’t stopped this creative team from creating memorable literary events around the city. They’ve also partnered with other organizations, such as the National Museum of Mexican Art, where they curate a night during the Sor Juana Festival. They conducted a radio show at Radio Arte, where they featured poetry readings and audio essays and conducted interviews with local artists to Mexican writing legend Elena Poniatowska, co-founder of the United Farm Workers and activist Dolores Huerta, and renowned Chicago-bred writer Sandra Cisneros. When the radio show ended its one-year run, the team wanted to continue reaching a wider audience. Gonzalez explains, “We had this collection of interviews, and we decided to make them accessible to people.” They created a website that began as an archive and evolved into their literary webzine, proyectolatina.org. “We took our reading series and created a virtual platform for it for people who can’t always make it the third Monday of every month. There were some pieces that were so amazing that people shared with us, and we want to keep sharing them and putting them out there.” 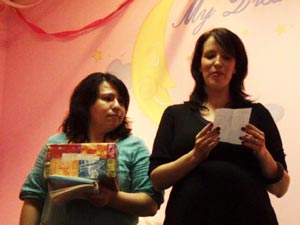 Now in its fifth year, Proyecto Latina has established itself as a place where bright estrellas shine and shy poets sparkle in an environment that is warm and friendly. “We’ve seen some of the women we’ve featured grow artistically. Some featured artists said that Proyecto Latina lit a match under them to finally get that project done that they’ve been meaning to get to, because they want to present something really good at Proyecto Latina. We also created an important open platform for voice.” People have approached Gonzalez to share how much Proyecto Latina has impacted them. “Sometimes we need to be reminded that what we have to say matters.”

For details on the next Proyecto Latina, which will feature Alicia Vega from Dulce Palabra, visit proyectolatina.org.