On the road, behind the wheel of their tour van, Thao Nguyen (vocals and guitar) switches up as driver with Adam Thompson (bass, keys and additional guitar). On tour with Mirah , traveling west on the highway, Thao with the Get Down Stay Down (Adam T. and Willis Thompson on drums and percussion) head to the midwest from their recent gig in New York. Returning with their acclaimed album, Know Better Learn Faster, Thao with the GDSD will captivate you with their good old country soul and vigorous indie rock ‘n roll sound. The album spans genres and speaks to heartbreak overtly and inequalities sublty while gently easing audiences with the all the uproar and fervor needed to withstand life’s ups and downs. Thao with the GDSD will lift your spirits and keep your toes tapping.

Thao’s easy going personality does not derail her astute lyricism and passion for women’s rights. Instead, her ease and calm must fuel and focus her musical vision. She does not shy away from her ideals and her ambitions. Like her musical career, Thao is a woman who knows no limits and humbly paves the way for the next generation of artists with her self-awareness and compassion. As we discuss everything from folk music to her ethnic background, I note her music’s universality. Her songs will touch at the heart, the spirit, and the mind in a country that grips at persistent racial paradigms. Despite the perpetual dichotomy of blacks and whites in the United States, Thao is a breath of fresh air in a stagnant and stale society. Her voice echoes the masses sometimes ambiguous, though anything but ambivalent reality. Her music and her presence speak to a possibility of maturity and growth for the music world and the nation.

As Thao piles into the back seat and gives me a ring for a quaint and candid conversation, we discuss everything from her upbringing in Virginia to race, gender, and representation. Along the bumpy highway Thao opens up about the music that has guided her through life, keeping her grounded and sane despite it all. Rockin’ out to good old folk and country-blues, as well as 90’s pop, Thao even shared about her-not surprising-early hip-hop influences. With toll stops, a dropped call, and talk about the Taste of Chicago, our pleasant conversation keeps the wheels of the tour van in motion until their lunch break pit stop. Thao’s sincerity and down to earth spirit shine through her music, as fluid and concise as her manner of speech.

Growing up in Virginia, what did you listen to? Is that where you fell into folk music?
I think it could have been part of growing up in Virginia. I was just drawn to folk and country music at the earliest. Guitar wise, that was the kind of guitar I learned first. I grew up listening to a lot of Motown and 60s pop music. I’m a big Smokey Robinson fan, Lovin’ Spoonful, and older country blues like The Thompsons.

What about folk music right now. You’re in this weird folk-rock, indie category. What was your journey coming to play this type of music?
I think that I took a lot of folk music that I love, but I don’t necessarily like to play or perform it. I wanted the energy and the rhythm and beat a more expanded sound could provide. I grew up with folk music, but I also grew up listening to hip-hop with my brother. I wanted more of a marriage of melody and music. I didn’t just want strum my guitar all the time.

Talk a little more about hip-hop, what were you listening to?
I love the Fat Boys, MC Lyte. As I got a little older I started listening to De La Soul, A Tribe Called Quest, Run DMC, and Queen Latifah before U.N.I.T.Y. I’ve always been a huge fan of hip-hop. In the late 80s early 90s I reached out to a lot of hip-hop.

Your first album or EP was a solo album, if I’m not mistaken. What’s one of the differences, joys or challenges of playing with other musicians?
We’re touring with Mirah right now. That’s great. That EP was a long time ago, maybe 2005. The last 2 records I’ve put out with The Get Down Stay Down. There’s a lot more energy and education with collaboration, which I appreciate and think is imperative to my growth as a musician. I prefer it.

You mentioned in an interview once that you “do it,” you make music “for the girls.” Can you talk a little more about that? What do you mean?
Have I said that before? That’s funny. I think it’s really important for young girls to grow up knowing that there’s a safe space, creatively, in whatever medium they choose to express themselves. I think music was really important in building my confidence and keeping me sane and focused. If in my career I can be an example of how that is possible, that’s really important to me.

“Swimming Pools” is probably the most of my a-political songs. It’s the most politically overt. It’s my ode to young girls growing up and women performing media roles, our obligation to younger girls, and what we have to do to make it easier for them.

I picked up the guitar when I was 11 years old. I grew up in a pretty tumultuous home. If I hadn’t picked up music I don’t know where I’d be.

I grew up in the suburbs of DC. But, I grew up in a home where I witnessed the consequences of inequality, the oppression of women, on a personal level within my family. That’s a lot of the reason why I studied sociology and women studies. I was going to go into women’s advocacy work. But, I went into music. I try to stay as involved as a I can. 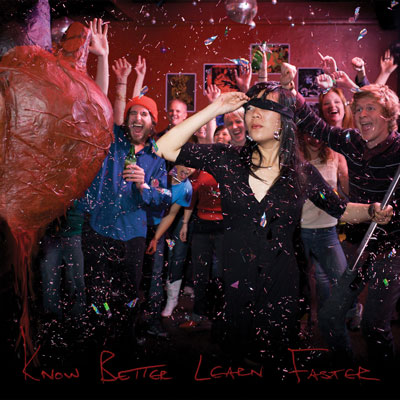 Who were some of your role models growing up?
When I was in 6th grade I dressed up as Susan B. Anthony. But, I don’t know if I had role models in that sense. There were a lot of teachers and strong women figures that I read about or knew about that inspired me.

I think that there was such a lack that I didn’t even know what I was missing. It’s not until very recently that I recognized that void. I grew up in a primarily white neighborhood school. So, I think I didn’t even notice, which is totally an issue within itself. Maybe there are a lot of reasons I didn’t look up to people. But maybe that’s one of them. It’s hard to say. But there’s something to be said that there could be such an absence, such a long standing absence [of role models], that you didn’t even realize there was one.

Do you think it’s difficult for Asian American, Asian immigrant youth to identify or place themselves in U.S. American culture?
I think so. I think that as I’ve been playing music and trying to establish a career, I’ve noticed what made me nervous before, to be identified or associated with my ethnicity. Now I understand and have a lot more compassion for that necessity. There’s not that much [representation] out there. I think it’s important to see that it’s possible. If I can help with that then I will. It’s not my main pitch. But if it comes with the territory, I’ll do it.

But I have seen that a lot of the teenagers that show up at the shows are Vietnamese American or Asian-American, and they’re really excited and enthusiastic that we have this thing in common. Which before made me nervous because it was not about music. But now I get it more.

What do you think your music reflects about U.S. American culture?
That’s not a conscious element of my writing. I don’t know if I want to be in any position to provide social commentary. There are elements that show up. For the most part, I write pretty autobiographical songs that I think are vague enough that I hope people can attach to. At least the songs in the past I haven’t mindfully added commentary.

What’s next? What can we expect from Thao and the GDSD in the future?
We should be putting out an album with Mirah. And we’ll be working on another of our albums.

Your lyrics are very poetic and precise. What’s your process for writing songs?
Something shitty happens, I pretty much write about it. That’s how it works. It’s all about those thoughts, my relationships in my life, romantic or otherwise. I love short story writers. Gracy Paley is one of my favorite writers. I respect any one who can say a lot of things with not a lot of words. I always wanted to be a writer when I was younger, instead of a musician. Hopefully I can go back to my writing.

Any words for the fans?
We’re grateful to be doing this. And we thank everyone for letting us play and share what we love.