Wandering around Pete’s Fresh Market on Rockwell and Cermak looking for some adobo, I happened upon the cleaning product and religious goods aisle. For those of you who may not know, every serious Mexican grocery store has a religious candle section, and it is usually in the cleaning aisle. Clean those floors, get the funk out of the house with some air freshener, and rid bad energy with religious candles and the divine incantations printed on their labels. It takes a lot of hard work to keep a home clean of grime and evil spirits; local retailers of all kinds are beginning to realize this. I even saw some Virgin Mary candles at Walgreens recently. It’s good to know large companies are beginning to exploit these cultural icons for profits–I mean, cater to the community and their religious beliefs.

Deciding I could use some candles for my dinner party, I perused the section looking for the designs and colors that would best complement my table settings. Did I want marigold or a pure white? Was I looking for health or divine protection at my dinner table? Hmmmm. Tough choices. Scanning all, I saw an image on one candle I hadn’t seen before in this aisle. It was of a woman who resembled the Virgin Mary. She donned a shroud and had flowers at her feet, but she was actually a skeleton. “Yes!” I thought. “Santa Muerte candles at the damn grocery store! And they are less than $2!” Could there be an icon more Mexican than this? Two central motifs in Mexican art and culture–The Virgin Mary and Death–rolled up into one totally bitchin’ icon. 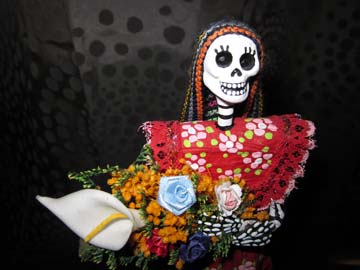 I was excited over this find. I had recently watched a very informative documentary on the cult of Santa Muerte in Mexico, narrated by Gael García Bernal. Considered a saint by some, she is officially rejected by the Catholic Church–although many of her followers consider themselves Catholic too. The origins of Santa Muerte and her worship are disputed. Some claim that, like the worship of La Virgen, worship of Santa Muerte represents a syncretic merge between the worship of indigenous, Pre-columbian dieties (specifically Mictecacihuatl, the goddess of the dead) and the worship of Catholic saints. Santa Muerte has become increasingly popular within the past few decades. There seems to be a correlation between her growing popularity and the growth of poverty and crime. Not in that she is causing it, but as more and more people find themselves stricken by the ravages of poverty and crime, they turn in desperation to whomever will listen. And who is always there for us? Death. The great equalizer. Santa Muerte has a large following among criminals and other marginalized people as evidenced in her ubiquitous presence in prisons. Others believe this is more of a Satanic cult of death worship and there is nothing Catholic or saint-like about her. Seems to me that whether Mexicans are praying at the feet of a bloody Jesus on a cross or a bewigged skeleton in a gown, death worship is a part of our heritage. As a child, I had a mirrored tile bearing the image of Jesus’s face, Jesus on the cross.  His eyes were practically rolled back into his head, his mouth open in an expression of agony and there were cuts all over his head. Blood was everywhere. When the lights went out, the brown ink was glow-in-dark. Talk about death worship.

Having a hard time deciding between classic black and blood red, I stood in the middle of the aisle with a candle in each hand, periodically lifting one up and then alternating as if they were on a scale. I was completely startled when a hand grabbed one of my arms tightly. I turned around and found a well-dressed man who smelled like laundry detergent and aftershave. His wife stood a few feet behind him looking down at the floor and not at me. She was probably thinking I was a Satanist. She had a kid in a stroller that didn’t look like either one of them. Then the man, who was holding a small bible in his hand, said, “Excuse me, Miss. Why are you buying that? Wouldn’t you rather have Jesus Christ in your heart?” His face was gaunt and pale. He seemed young, but his skin seemed older. His eyes and face bore the expression of someone who came to Jesus after some serious sinning or partying or both. I quickly created his backstory in my head. Former drug user? Repentant homosexual? Both? Neither the husband nor wife had a grocery cart. Did they just hang out in this aisle? Did they magically appear? Now I was beginning to seriously wonder where they got their kid. Pretending to not understand, I said “Uh, what?” He repeated himself, “Don’t you want Jesus in your heart? Don’t you want to be saved?” Angry that his hand was still on my arm even though he had loosened his grip, I jerked my arm away with some attitude. “No, not really. Thanks though,” I replied and walked off. I heard him breathe in deeply as I stepped away.”What’s this world coming to?” I asked myself. “I can’t even buy commercialized images of cult figures in peace anymore.”

Will Santa Muerte smite your enemies? Will she protect you? Will she bring you fame and fortune? I don’t know. All I know is that she brought me a couple of people who weirded me the hell out and invaded my personal space. Maybe next time I will get the black Santa Muerte candle instead. That ought to protect me from people like dude.