First, not too long ago, it was several wooden bracelets with different saints on them. Then my father gave me a T-shirt with the image of La Virgin de Guadalupe that said “Amor Guadalupana.” On the back it said “Reina de Mexico.” I instantly liked it and still am not sure why. Something in my blood perhaps. Or, maybe the gold glitter and rhinestones won me over. Then, for a birthday present, he gave me a gold watch with the image of the Virgin Mary on the clock-face. I don’t wear watches, but I have worn that one occasionally. Whenever I do wear it, I look down at the face of my watch and think to myself: “Time to say your prayers, Reyna!” After that gift, I didn’t get anything else from him for a while. Since my dad only took me to church twice a year when I was a child, I was confused over his newfound religiosity. Did he think I was a wayward soul? Was he giving me this because I told him I was feeling a bit down lately? Was he dying? I didn’t want to think about any of that and hoped the whole religious-themed gift thing was over. 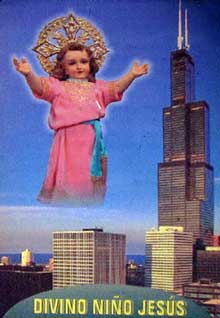 But, last week, he gave me one of those prayer cards like you would find at a funeral home. This one had El Divino Niño Jesus, arms outstretched, superimposed in a shot of the Chicago skyline standing next to the Sears Tower. My dad furrowed his eyes at me when I laughed and said “What is this big baby Jesus doing there? Is he going to protect us from Godzilla?” I put it in my wallet–where I still keep it.

I am not a Catholic now and I never really considered myself one. I attended catechism classes as a child and went to church sporadically. I disliked every moment of it. Early Saturday morning catechism classes cut into my cartoon time. My catechism instructors never seemed able to answer my questions. I got a weird vibe from the priest and altar boys, too. They often just stood there before service, all dressed up, with their ceremonial wine-imbibing accoutrements, talking amongst themselves, largely ignoring women and girls–who are not permitted in the altar space. Later in life, I would get that same vibe at some of this city’s lamer gay bars. I eventually stopped going to my church completely. Religion was okay for some people I guess, but just blindly accepting the word given to me by people in robes–white or black–just wasn’t my style. I was too cool for that.

Besides, people seemed so hypocritical with their religion. That’s what struck me most at the time I came to reject all things Catholic. And what angst-laden, too-cool-for-school teenager doesn’t enjoy catching a glimpse of hypocrisy and throwing it in everyone’s face? How many gangbangers have I seen in the street throwing down gang signs while wearing a T-shirt with the Virgin Mary on it? How many drunk drivers keep Virgin Mary statues on their dashboards? How many bloody beatdowns or worse have gone down in front of murals of La Virgen? How many adulterers creep back home, opening their doors quietly, careful to not let their Virgin Mary keychains dangle against the door too loudly? Sinners, all of them. And when the image of La Virgen isn’t actually physically depicted on something, she manages to just–poof–appear.

It was a cool spring evening back in 2005 when it seemed all of Chicago was abuzz about a Virgin Mary apparition at a Kennedy Expressway underpass on Fullerton Avenue. I had seen makeshift altars spring up in the Back of the Yards on not one but two trees that purportedly held images of La Virgen. Both were separated by a mere few city blocks. It’s a miracle! No, two miracles–in the same ward! One looked like what it was: tree fungus. The other, though, was quite eerie. Very moving. It looked like Jimi Hendrix. I felt he was calling me to kick open my doors of perception. Naturally, I was curious what this new apparition looked like. Bored as hell, just cruising around in my ride, a couple of my girls and I decided to check it out in person. 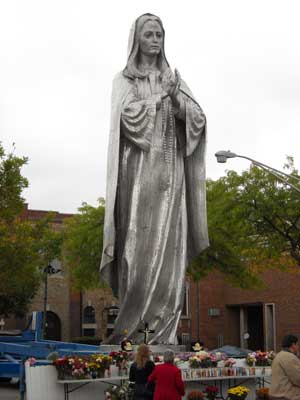 I began to realize this was more than just some stain on the wall as we neared the spot and had to park blocks away. Groups of people, even entire families, walked toward the wall. As we neared, there were rows of people around the image. It did look like the Virgin, a little too much like her, and some people claim that the image was actually created by a person and not divine water leakage. That didn’t stop people from flocking there. Dozens of candles and flowers were placed at her feet. People had taped up flyers and photos of missing persons all around the image on the wall. Cutting into the crowd a bit, I saw people kneeling and praying, some weeping openly on their knees, heads against the wall, with pictures of loved ones in their hands. Presumably these people in the pictures were missing or ill or in some other danger. Everyone was Latino. It seemed fitting that the apparition was on the north wall of an expressway underpass. Divine encouragement to a group of people who suffered their way to the north–many still suffering.

As I have grown, my attitudes about Catholics and their religious idolatry has shifted from ridicule, to contempt, to curiosity and fascination–and most recently, appreciation. Why do our people see the Virgin in everything? Some researchers claim that the exaggerated worship of La Virgen among Latinos dates back to colonial times when indigenous religions, with their many female deities, were struck down. Colonized peoples syncretically transferred their idolatry of other female goddesses to La Virgen–the only female in the entirely new Christian cast of characters. Some more interesting takes on the issue suggest that the traditional image of La Virgen is actually one that depicts female genitalia. Think about it, the head is the clitoris, the rays of light are the outer labia, etc. So, the worship of the Virgin Mary is actually a form of worship to a different, earthly giver of life–the vag. The phenomenon typically invoked during discussions of religious sightings is that of pareidolia, which is the term given to our tendency to make meaningful patterns out of visual (sometimes auditory) information. Seems to me, though, that more than just creating meaningful patterns from sensory input, La Virgen worshipers, like those crying and praying and kneeling at the dank, dirty underpass, are trying to make some meaning out of this life. Aren’t we all?

4 thoughts on “Virgins and Saints: Part I”