Some say that the University of Puerto Rico (UPR) was founded in 1903 in order to produce a local intelligentsia subservient to the demands of the United States, which only five years earlier ripped the island from Spain. In the 107 years since, the exact opposite has taken place. 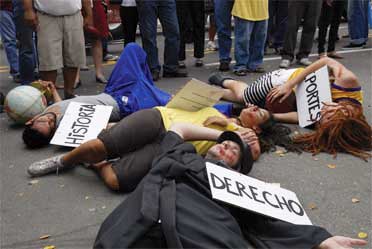 In 1948, pro-independence students invited the President of the Puerto Rican Nationalist Party, Dr. Pedro Albizu Campos, as a guest speaker, who recently had been released after serving ten years in a U.S. prison. The then-Chancellor of the UPR’s Río Piedras campus, Jaime Benítez, refused to allow Albizu Campos to enter, prompting student protests. In response, a group of student leaders who held Puertan Rican flags, which was illegal during the time, were expelled.

In 1970, a massive student struggle emerged in the midst of the Vietnam War, calling for the removal of the ROTC from the Río Piedras campus. During the conflict, a policeman killed a young student, Antonia Martínez Lagares, who subsequently became a symbol of the Puerto Rican student movement.

On April 21, 2010, a new student movement commenced in response to the austerity measures proposed by the UPR President, José Ramón de la Torre, and the governor of Puerto Rico, Luis Fortuño, spawning an indefinite strike that has paralyzed the UPR system and brought international attention to the island.

Entering his second year in office, the right-wing and pro-statehood governor has proven to have little respect for Puerto Rico’s institutions. From firing nearly 20,000 government employees that provoked a massive one-day general strike to cutting the Institute of Puerto Rican Culture’s budget in half to getting rid of the membership requirement for lawyers to one of the island’s oldest institutions, the Puerto Rican Bar Association, Fortuño is reshaping the island, as many believe, in order to prepare it for statehood.

The UPR is no exception to Fortuño’s reign of terror. A new proposal, Certification 98, passed by the university’s board of trustees, eliminates fee exceptions for student athletes and university employees and their families. Furthermore, there is a proposed budget cut of up to $100 million. In response, a student-driven negotiating committee of 16 members was created, and a list of demands were composed which includes alternative measures to the massive budget cuts. These measures include the budget reduction of the burdensome Office of the President and a call for payment of multiple private and public entities that owe the university millions of dollars. The UPR President and the Río Piedras Chancellor, Ana Guadalupe, refused to meet with the committee and washed their hands of the issue by transmitting their demands to the board of trustees, which are dragging their feet to review them.

Thus on April 13 over 3,000 students from the Río Piedras campus assembled in an auditorium, and the majority of those present voted in favor of a 48-hour strike. The UPR administration still refuses to meet with the students.

Now the UPR is experiencing an indefinite strike, which has expanded to include 8 of the 11 campuses throughout the island.

Hundreds of students and staff even occupied, for a time, the Río Piedras campus until riot police, at the insistence of the chancellor, forcefully removed them. Then she officially closed down the university’s operations, locked the main entrance, and ordered police to guard the campus. This prompted a student lawsuit, and the Puerto Rican Supreme Court ordered the university to re-open its gates by May 3. Meanwhile, hundreds of students have congregated at the gates, holding theatrical performances, discussions, and even clean-ups and beautification projects of the surrounding area. 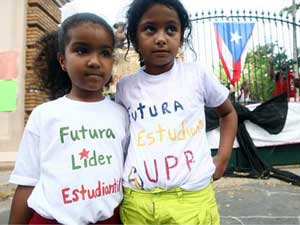 The response in support of the UPR strike has been significant. The official Student Council of Río Piedras initially opposed the action but soon joined the negotiating committee. The Puerto Rican Association of University Professors and the Committee of Students of Private Universities have also joined the strike. Moreover, on April 27, a huge concert with thousands of students, called “¡Qué Vivan Los Estudiantes!” (“Long Live The Students!”) was held in front of the locked gates of the Río Piedras campus. Musical artists from the island and around the world, such as Calle 13, Ricky Martin, Rubén Blades, and Juanes, offered their support.

Nonetheless, the opposition has remained firm. Fortuño himself, a day before the concert, spoke directly to the strike in his yearly “State of the Commonwealth” address. In his incendiary speech, which received massive applause by the pro-statehood-controlled Congress, he chastised the students for abusing their “privilege,” especially in the face of such a gracious government system. Reminiscent of a national speech by Mexican President Gustavo Díaz Ordaz when confronting massive student protests on the eve of the 1968 Olympics, Fortuño said that the people of Puerto Rico are of law and order and believe in democracy. At the conclusion of his address, he said “…we are here, ready and willing to offer the help… to protect the rights of all the students – both to the minuscule group that protest to the immense majority of those who want classes to continue.”

As mentioned earlier, there is a long trajectory of student struggle at the UPR, proving that one of the most important institutions in Puerto Rico is producing minds eager to reshape the challenge with a fair dialogue and open arms or continue a tradition that left the Plaza of Tlatelolco in México City stained with blood in the summer of ’68.

4 thoughts on “To Study and to Struggle”