The stench of death is thick in the air. In the distance, the sound of a faint groaning and the shuffling of rigor mortis-ravaged walking corpses slowly eating their way through the human and not-fast-enough animal population of your home town. The lucky survivors thus far stay together in bands like early tribal times, fighting over the scraps of society. The world as we know it has come to an end, but at the hands of what? Who are these gouls with their familiar faces, their eyes as empty as a porcelain doll’s?

Lately there has been a resurgence of the campy, ultra-gory zombie film genre. What is the attraction to these movies, books, and graphic novels? What is a zombie? A lifeless reanimated corpse with no real meaning. Now think of what you do on a daily basis: do you mindlessly go through the motions of life? Zombie movies are supposed to draw a parallel between mindless, lifeless creatures and the average person, as least according to the godfather of Zombie movies George Romero. 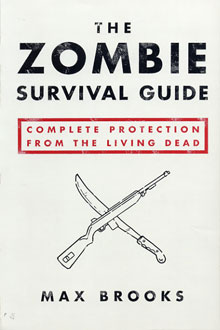 For me the love affair began when I was a third grader. Every few months Scholastic books would send book catalogs to the classrooms of my school and it would be a competition to see who could get the coolest book. That particular month, they got my order wrong and when I opened my box I got something called The Zombie Handbook. It was a collection of random supposedly true stories and “real” pictures. When I first looked at it, I had to close it immediately out of sheer fright. Back then, my family lived in house with a huge front yard which now turned into a graveyard in my young, impressionable imagination. I hid the book from myself so that I would never have to see it again. Some years later when I was a senior in high school, my mother handed me a book for my birthday present: The Zombie Survival Guide. It outlined in practical terms how to survive when faced with the living dead. It was given to me as a gag, but little did I know that by the end of this read I would be prepared as a survivalist in the event of the Zombie Apocalypse.

Here now is a list of quintessential zombie-related media. Think of it as required viewing in order to (hopefully) spark in you the same passion for the genre that I have and (hopefully) help you survive in the event of the zombie apocalypse:

2 thoughts on “I’m Ready for the Zombie Apocalypse, Are You?”