All images courtesy of Isabel Gonzalez

I know it has been a while since I checked in with you. I have been very busy working and taking care of business. I’ve been trying to better myself, trying to be a better person for the sake of my family and community, trying to play the game and win. So, forgive me that I haven’t had the time to connect with you lately. But, recently, I have heard all kinds of craziness about you. Girl, are you okay? What is really going on with you? And, what’s up with this Juan Crow character? I think we need to catch up.

Some of the noise I have heard in the past two weeks has been completely ridiculous. All I could do was laugh. You are doing away with ethnic studies courses in Arizona? Why? You think the practice of putting microchips in immigrants–the way people do with their pets, cars or other property–is a good idea? Have you lost your damn mind? And, is it true that Shakira came to talk to you about changing your ways? Seriously? You know you are running out of control when you got some random Colombian pop star all up in the mix trying to intervene. 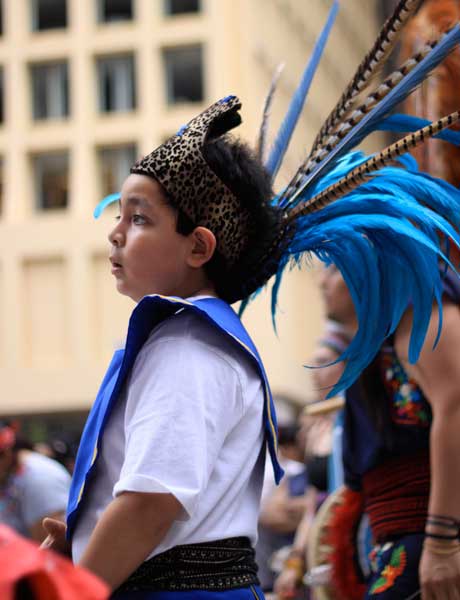 But, honestly, America, some of the things I have heard have me very concerned. Like Arizona’s SB1070, which essentially legalizes racial profiling and allows for the detaining and charging of those who cannot produce proof of citizenship or resident status. Being brown is now probable cause as decreed by law. Seems like Utah and Texas are considering passing similar laws. People are snapping off all over, huh? Out in Cali, you are entertaining the idea of deporting natural born citizens if their parents are undocumented immigrants. For serious? Isn’t an immigrant your governor? Oh wait, you meant “immigrant” immigrant, as in LATINO, as in the problem with America. Gotcha. You think that being an American is in “your soul” and takes more than just crossing a border? You know, while watching that debate, I cried a little. I can’t front. There was nothing else to do as I absorbed the images of those angry people sitting there applauding the deconstruction of families and lives of immigrants–people who are just trying to work and have a better future in peace, in America as Americans. But, then my sadness was wiped swept away by anger. What the fuck do you know what is in my soul, pendejos? If believing that you can bootstrap your way up and have a better life isn’t American, I don’t know what is. Well, maybe if I am to follow the lead of GOP Representative Duncan Hunter, the soul of an American should be filled with xenophobia, fear and fascist solutions to complicated economic and political issues that have been fomenting over the last, damn near, 200 years.

I don’t know if I ever talked to you about this but, when my dad first heard about you, he did everything he could to meet you. He was a barefoot twelve-year-old boy in a rural part of Mexico when he heard that it was possible for a man to work hard and earn well to feed himself and his family. It was possible to be free and safe and healthy. The police weren’t crooked, and the government was run by the people and for the people. Running, jumping, swimming–even some cycling and hitchhiking–he pulled some Mexican Iron Man Triathlon shit to find you. Having been deported three times, he placed in the competition three times before taking the grand prize: citizenship. I joke about it now, but he doesn’t really talk much about those times. Considering the elements in the desert, the madness in bordertowns like Tijuana, violent coyotes, shady American employers that work the newly undocumented like indentured servants, and corrupt law officers, crossing can be very traumatic for immigrants. I can’t imagine that my father spent all his youth trying to get to you. But he did. He believed in you. Since finding you, he has cleaned your toilets, removed your asbestos from buildings without any protection from OSHA, been your janitor, boxed your foods, and worked assembling gigantic metal crates which you use to ship your military goods. Sometimes, you know, I wonder if he stopped just short of true freedom: Canada.

The only law he broke was crossing a border that had crossed Mexicans many years before. He went north to find work like his father did, and his grandfather. My dad just ended up going seriously north and found himself in Chicago. But, he is a law-abiding man–like most immigrants are. When I was a kid, he told me to always be on time, clean and hardworking. When I asked why, he explained that people here think Mexicans are late, dirty and lazy. I laughed. Where do these people who believe this live? Opposite Land? Turns out, these people are all around. They even think they can tell what an immigrant looks like. They think it’s in your skin, clothes, car, or accent. They don’t know shit though. I can tell you what an immigrant looks like. When you see a quiet person in the shadows trying not to attract attention, scurrying past you to some menial job that keeps this economy in motion, avoiding eye contact so as not to show their fear of being deported–or sadness over learning this is not the land of the free or home of the brave–then you got yourself an immigrant. (As a side note, girl, some people are saying this influx of Latin American immigrants marks the beginning of the end: the fulfillment of the Ghost Dance Prophecy. And, then there’s that 2012 stuff. Hey, I’m just saying is all….)

America, I can see that you are going through some shit right now. It’s not cool. All this nonsense just isn’t becoming for a woman of your stature. Hatred, bigotry and xenophobia–how many times are we going to go through this? First the Irish and Scottish, Germans, Eastern Europeans, then Italians, Chinese, Japanese, Indians, and most recently Middle Eastern folks. Don’t get me started on the people you kicked off this land and those you brought with you. What is it going to take to break this cycle of fear? Are we going to have to run out of nationalities to fear before we learn to stop fear itself? We cannot keep doing this every few years with a new group. And, we cannot come up with realistic and practical solutions that are motivated by fear and hatred. So, something’s gotta give, girl.

I mean, this isn’t the America I know. So, I just want to let you know I am here for you. I got your back and always will. I see now that I need to step it up because I have been neglecting you. It’s time for me to get serious in my desire to help you and put your health and stability on my priority list. I have to get the word out, to anyone who will listen, that you are steady trippin’ and in need of some serious help. Time to find some organizations at the forefront of immigration reform and social justice that are worthy of my efforts and money. Time to increase my monthly donations to the ACLU while I am at it. Time to take it to the streets, too. I got my walking shoes. If it comes down to it, I ain’t afraid of getting arrested either. You know how I roll. If I get a bit crazy sometimes, it’s because I love you.

America, just know there are lots of us out here pulling for you, and we’re not going to let you go down without a fight.
Believe that.

Note: View more of the photos by Isabel Gonzalez

11 thoughts on “An Open Letter To America”