The night we stopped by, Manigua Academy of Music and Dance was alive with the energetic, gracefully complex moves of Bollywood dance. Music poured onto Lawrence Avenue, catching the attention of passersby who admired the dancers through the large storefront window. It’s easy to see why Manigua’s dance classes are so revered by students. The energy and positive vibes emitting from the teacher and students were contagious, and the instruction was precise and friendly. That night an entirely choreographed sequence was broken down into understandable steps that the students mastered at the end of an hour. It was amazing to witness. 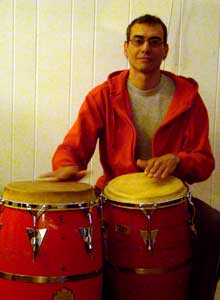 Charly Barbera, founder of Manigua, explains that its mission is to have world music and dance reach as many people as possible. “We want people to be aware that there’s a lot of really good musicians dedicated to different world folk styles right here in the city of Chicago—that we don’t need to go beyond Chicago to find that. We want to connect the local community with those people.”

The concept of Manigua first started ten years ago as a way to provide on-site percussion and music classes to people in need of a social environment and community. As such, Manigua worked with at-risk youth, recovering heroin addicts, and men in residency programs who were trying to get their lives back on track. Later, Manigua began focusing on schools and participated in arts integration programs. Just a short three years ago, Manigua opened up its own space in Ravenswood and soon started using the location to run classes for the entire community.

Manigua now offers a wide range of classes, such as conga drumming, Brazilian percussion, salsa dance, belly dancing, hip hop dance, bomba dance, bachata, music theory, stretching and relaxation, and dance classes for kids. Class sizes are kept small, usually under ten students. Barbera notes, “People really like the small classes. They think that Manigua has a homey feeling. That warmth is definitely there.” Program Director Laura Riebock adds, “Because we’re so small, the classes are very personal. You get to know all of your students really well.”

Riebock, who teaches the belly dance and salsa classes, started dancing about ten years ago with classical training in ballet, jazz, and tap dance. When she started taking classes at Manigua, Riebock also began helping to promote Manigua and expand its class offerings. Riebock emphasizes, “We really try to bring as much variety as possible. We also try to bring something unique to the community—classes that you can’t find just anywhere. And, of course, we bring quality instructors.” 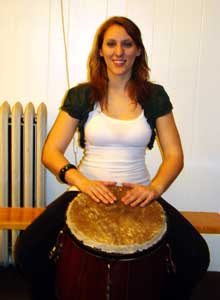 Barbera, who grew up in Miami and the Dominican Republic, started studying percussion “through osmosis” by being around traditional musicians on the Caribbean island. Barbera continues studying percussion on his visits to Cuba as well as with Tito Rodriguez at AfriCaribe. Barbera, who plays percussion with Chicago funk band Crystal Gravy, explains, “My strength as far as folkloric music is Cuban, Dominican, and Puerto Rican, but I consider myself to be more of a jazz musician. What I mean by that is that I like to fuse all sorts of music like punk, jazz, and blues.”

In the spirit of exploring different music, Manigua is now considering offering guitar lessons. Barbera explains, “Stuff also happens here organically. For example, the reason we’re going to start offering guitar classes is because we know someone here who wants to offer guitar. That’s also how the Bollywood class started. People are approaching us about doing these things, and we have the space and the time for it.”

With its wide variety of classes, Manigua brings world music and dance to Chicagoland residents. Where else can you learn modern and traditional conga drumming from a seasoned conguero with such diverse training? Where else can you learn Bollywood and salsa at the same location? Or take weekly one-hour dance classes for only 50 bucks a month? Manigua is truly a hidden gem of energy, creativity, and value.