Juanna Rumbel laces her skates tighter and watches her competitors circle the flat track rink like sharks. It’s a big crowd tonight. People are already spilling into the upper decks of the UIC Pavilion and they’ve sold a record number of group sales. Their faces are painted, they’re clutching homemade signs, and they’re already dancing in the stands to the punk rock theme songs blasting in the stadium. Later, when the tickets sales are calculated, the Windy City Roller Derby fans will break the attendance record. 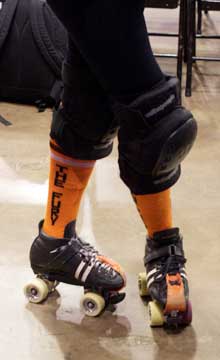 And to think, it all started with a bake sale.

Back in 2004, dark haired, dark eyed beauty Elizabeth Gomez took a vacation to the mecca of roller derby revival Austin, Texas. There, she fell in love with the flat track. “When I came (home) to Chicago, I wanted to join a league and there were no leagues started at the time. When I reached out to other girls in other cities, they came back to me and (asked), ‘Well, why don’t you just start it?’ ” She had never seen a roller derby, had no money, and her self-described skating skills “stink”.

“And they were like, ‘So what?’ They were right! So fucking what!?” Elizabeth laughs. “That’s how it started.” She partnered with Kelly “Sister Sledgehammer” Simmons and reintroduced roller derby to the Second City. The fundraising began (with that first bake sale) and Elizabeth Gomez became Juanna Rumbel.

Part Wonder Woman, part Joan Jett, Juanna Rumbel is the best friend you’ve always wanted. She’s quick to smile, laughs loudly, and has the confidence of a supermodel. Often, she flashes you a conspiratorial smile that make you think that later tonight you’ll be getting into trouble if you stick with her. Not to worry though, if she leads you to the wrong side of the tracks and trouble rears its ugly head tonight, she’ll be ready to kick its ass.

Outfitted in The Fury’s brass knuckle-logoed orange and black uniform, Juanna Rumbel stands tall in her skates and is proud to be a derby girl. “There are very few sports that are geared towards women. It’s a game that we basically made up the rules to, we founded most of the leagues, (and) we play most of the games. It’s hard, it’s contact, we can wear lipstick, we can wear our hair in ponytails, we can wear shorts, we can wear skirts. . . It’s extremely athletic while still being able to maintain your femininity and I think that it’s an honor and a nod towards women in general, right? We can do anything and still look good!”

The juxtaposition of being girly and tough isn’t the only clash that Juanna navigates. She is also a working mom with two young daughters who has to balance her busy schedule with demanding practices that can stretch as late as 11 pm. Derby girls are also expected to participate in the league’s guerilla marketing schedule of street teaming, doing interviews, and answering the constant flow of message boards and emails. “It’s a lot of work. The forty hours you put into regular work (a week); you could be putting in another forty of just derby. . . It’s pretty intense.”

Nights like tonight make it all worth it though. In front of a packed house of screaming fans, The Fury dominates the Double Crossers 128 to 51 thanks in no small part to Juanna Rumbel’s teeth-rattling hits. The hardest hit she’s ever given? “Oh, I can’t remember.” She grins, “I do it all the time.”

Want to see Juanna in action? The Windy City Roller Derby League continues its 2010 season this Saturday April 10th at the UIC Pavilion (525 S. Racine Avenue). The doors will open at 5 pm and the hits start at 6 pm as The Fury takes on the Maniac Attackers and the Hell’s Belles try to hex the Double Crossers. Tickets are available online now. Visit the Windy City Roller’s website for the latest stats and upcoming events.