Passing Western Avenue and entering through a humongous steel Puerto Rican flag, marking the entrance to Paseo Boricua and Humboldt Park, what one sees is totally dependent on who you are talking to.

Some see a ghetto. Others see a strong community. And there are those who listen to their iPods and stay clueless. What I guarantee most do not expect to find as they pass old men wearing well pressed guayaberas, is a window-front prison cell with volunteer prisoners.

In 2006, National Boricua Human Rights Network (NBHRN) thought of an idea to bring the issue of the Puerto Rican Political Prisoners to the forefront of the community’s and city’s consciousness. The organization, which focuses on issues on human rights in the Puerto Rican community in the U.S. and on the island, decided on a new type of performance art that would engage residents, activists, and of course the federal government. At that time one of the two political prisoners, Oscar López Rivera, was completing 25 years in jail. So, NBHRN built a mock cell at the window-front of the Café Teatro Batey Urbano youth space, exactly 6 feet by 9 feet, with prison bars, a bed, and a toilet. For 25 days straight a volunteer stayed imprisoned for 24 hours with only books, paper, and pen to pass the time. The event even reached the pages of the Chicago Tribune.

“The response was overwhelming,” says NBHRN National Coordinator Michelle Morales, 34. “From the media [to the] community and it was positive! We decided to revisit it this year for the 30 years of incarceration of [political prisoner] Carlos Alberto Torres.” Now, four years later as one walks down Division Street, white-shirt prisoners can be viewed again imprisoned behind glass. 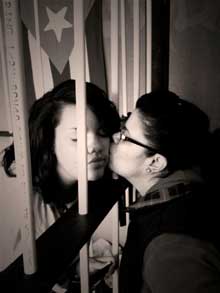 On one of my visits to the cell, I met a young woman sitting solemnly on the bed who was very much proud of her contribution. When first hearing about the prison cell project, Julia Montañez, 17, thought “I wish I could do that. I want to be part of this movement to free the political prisoners.” When asked what her family thinks about her doing this, she said “They support this and visited me. They support the movement also. We’re a very politically aware family.”

Although all this began in Chicago, it is spreading throughout the country. “I’ve been involved [in NBHRN] for 8 years and this is the first time I see the campaign in an upswing. We’ve developed new chapters in Detroit, New York City, and New England,” says Morales. New York City is also conducting a similar prison cell project in the El Barrio/East Harlem community.

On April 3 the last volunteer prisoner will be released from the mock cell and a large event is planned for this. That date was chosen because it marks the 30th anniversary of the capture of Alberto Torres alongside 10 other political prisoners. After decades of activism and a swelling movement, all were released by presidential clemency in 1999 except López Rivera and Haydee Beltrán (who was released last year). It is also the birthday of the last volunteer prisoner, who at one time was a real political prisoner in federal prisons.

Ricardo Jiménez, 53, was 23-years-old when he was captured by the police in Evanston, Illinois in 1980. “Based on international law colonialism is a crime against humanity. We were part of a national liberation struggle for Puerto Rico,” says Jiménez in a strong tone, stating what was his crime. The 11 who were captured in 1980 were sentenced with a peculiar crime called seditious conspiracy to overthrow the U.S. government. Though, they were not charged with any particular violent crime. For this, the group received sentences ranging from 55-105 years. Jiménez was sentenced to 98 years.

Now Jiménez spends his time ensuring that his two imprisoned compañeros get released just as he was. “We must bring them home,” he says with determination. He recently traveled through the East Coast with the NBHRN sponsored play “Crime Against Humanity,” visiting the multiple NBHRN chapters, speaking at community centers and universities. The play, which offers first hand accounts of the suffering the political prisoners experienced while in incarcerated, is co-authored by former political prisoner, Luis Rosa, who will be attending the April 3 event.

When asked what she would say to Oscar López Rivera and Carlos Alberto Torres if they were released, Julia Montañez paused and thought carefully for a moment, and with a smile uttered, “I’d say, ‘We did it!’”

*If you’d like to see the cell project and its volunteer prisoners for yourself, it is located at the Café Teatro Batey Urbano, 2620 W. Division St (by Rockwell St.). The culminating event will be at the same location on April 3 from 6-9 PM.

One thought on “A Prison Behind a Glass Window”