It’s Thursday, February 18th of 2010. Columbia College Chicago is hosting an evening with one of the greatest African American voices of the seventies but before the artist comes out, a young announcer introduces two spoken word artists.

The young announcer then takes back the microphone and invites the small audience to purchase a book of poems and the new record—available outside the auditorium after the show. He then nervously mispronounces the artist’s name to summon him on stage: ‘Ladies and gentlemen, without further ado please allow me introduce you to Mr. Jill Scott-Heron!’

The man will be sixty-one on April fools day and it shows as he approaches the microphone, tottering a little. Scott-Heron waves off the applause, smiles, and takes a minute to examine the audience: a surprising mix of music scholars and much younger students- all most likely better acquainted with a voice at least fifteen years crisper (it’s been that long since Gil Scott-Heron last recorded an album) than the one that now nervously says ‘Good evening. How’s everybody?’

You can tell just by looking at him that the man is aching for a cigarette.

‘For those of you who… for those of you who bet I would not be here…’ -he continues- ‘You lose‘. He goes on telling the audience that he planned to talk about his book and new record for the first ten minutes of the show, but since the young announcer already told us they are available outside the auditorium, he has been forced to think of something else to say, improvise and tell us some stories called “That’s when the fight started.”

Gil Scott-Heron. The grandfather of Hip-Hop, scrawny and white haired, his sunken eyes filled with mischief, clears his throat and begins, ‘We were in the Dan Ryan… for about a week… and we came upon an accident where a man had run into the back of another man’s car…’ everyone in the audience looks attentively at the legend speaking, ‘…and the man in the car that got hit came back to complain, and… and he was a dwarf…” the audience giggles nervously. Someone actually goes “uh-oh”… ‘…and he, he looked at the wreck and he told the man who hit him, he said: I’m not happy…” The grandfather of Hip-Hop pauses. He has excellent comedic timing.

‘…and then, then the man said ‘Well then, which one are you?”

“That’s when the fight started”.

Gil Scott-Heron laughs like a kid. The audience loves his string of “fight” stories and happily allows him to carry on cracking jokes for a solid half hour. Eventually the musician sits at the piano, still joking. Chords start flowing through his fingers and the humorous undertones of the atmosphere in the auditorium are drowned with a raspy voice that complements beautifully the melancholic melody. Scott-Heron delights the wide-eyed audience with a bluesy version of “Blue Collar,” followed by an equally beautifully rendered piano only “95 South.” It’s bewildering how beautiful, how emotive and haunting he sounds today, specially when compared to the Gil Scott-Heron of the seventies, with poems that sound young and politically challenging, like “Whities on the Moon” and “The Revolution will not be Televised”

Today, four decades after “The Revolution Won’t be Televised” was recorded, it has been covered and referenced by dozens of artists, including the Mexican band Molotov, making us wonder if he thinks the socio-politic problematic embedded in the song is universal and if he thinks it translates south of the border; does he have a message for the Latino community? Or is it the same for them as for the messenger in “Message to the Messenger”? 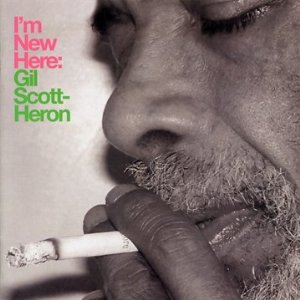 The new album “I’m New Here” is a very short and sweet allegory for an old man staring back at his life and exposing its antics to the listener with no remorse, and a newfound hope. Reflective, honest, introspective, bluesy but never bitter or tired, it was produced by British producer Richard Russell. Rusell’s list of protégées (The White Stripes, The Raconteurs, Dizzee Rascal, Basement Jaxx, M.I.A., Devendra Banhart, Thom Yorke and The Prodigy) should tell you a bit of what to expect from “I’m New Here,” and why the jazz and funk heavy Scott-Heron of the seventies sounds like futuristic blues, or proto trip-hop in 2010.

The album is sandwiched between a two-part poem that reflects on and pays a beautiful homage to the actors (actresses, really) of Scott-Heron’s upbringing called “On coming From a Broken Home,” recited over a loop of “Flashing Lights” by Kanye West. Between that poetic parentheses are eight remarkably well produced tracks (and five interludes) that include three covers: An almost “old-school trip-hop” cover of Robert Jhonson’s “Me and the Devil Blues,” the title track and immensely beautiful cover of Smog’s (Bill Callahan) “I’m New Here” and the equally charming blues-of-the-future “I’ll Take Care of You” originally written by Brock Benton. You must check out the tracks “Where did the Night go,” “Running,” and “The Crutch,” all spoken word pieces delivered over loops reminiscent of the album “Third” by “Portishead,” and by all means the musical capstone of the album: “New York is Killing me”.

Both live at Columbia College and in the new album, it is pleasant to hear how one of the most recognizable and influential voices of the seventies got only better with age. “I’m New Here” is a must-have, an album that might just the best comeback of any artist in the last two or three decades. At only twenty-eight minutes, the only weakness we found in “I’m New Here,” is the absence of a twenty-ninth.

4 thoughts on “The Grandfather of Hip-Hop: Gil Scott-Heron”