I’m here at Impala Sound, a fresh new gallery in Rogers Park. With me are Dustin Covert, Mitchell Covert, Steven LaGroue and Dave Mata. With roots in the Chicago suburbs — but no strangers to the city’s music and art scene — these four guys are ready to put their collective ideas together and start fine-tuning their gallery space. With many thoughts about the now, as well as the future of art and music, one thing is for sure: what’s to come from Impala is sure to draw people eager to be immersed in great artwork, a welcoming scene and hip-shakin’ beats.

A stack of speakers left standing from the last show looks ready to rattle the floor. With the vast collection of records and the equipment to push the last drop of sound out, events here shouldn’t be overlooked. Artists will have a new place to showcase their pieces, and musicians looking to play or record their work will be able to do so in an atmosphere that radiates energy, good vibes, and love for the Chicago art culture.

Gozamos: So, what is Impala Sound?
DM: Right now Impala Sound is a non-profit art gallery in Rogers Park run by a collective of musicians and DJs.

Gozamos: You guys have only recently started organizing and hosting events. What’s been going on and what are your thoughts on what you’ve seen so far?
SL: So far we’ve hosted an art event sponsored by the skateboard company RVCA that brought three of their artists and a performance by a punk band called The Infected. That was a really good turnout and I think that the art was well received. Before that we had three sludge metal acts from Louisville, Pittsburgh and Chicago. I think it was interesting to see the people that they contacted that weren’t necessarily familiar with us before then, and it was a good turn out.

Gozamos: You guys have a history with music and art. Fate, luck, hard work and planning; what brought you together and created what we see here?
DC: Me and Dave used to rehearse in a practice space in Humboldt Park, off and on for about five years. We were living in the area and you know, moving into various apartments around that area because of the practice space and then the building got shut down. We came across this spot and we all came up here to check it out and it was big enough to house more than two or three people. It was big enough to house four or five people. As an added bonus, there was a storefront and the basement became our rehearsal space so the storefront opened up a bunch of new doors for things we never even thought we would have control over. 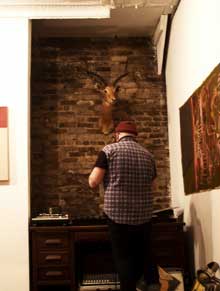 Gozamos: I’ve heard you guys have a lot of ideas on what to do with this space. What are some plans for the future of Impala?
DC: We wanna host at least once a month a visual artist, and have their work hang for a month and have a big formal opening. We also have a lot of ideas to do things throughout the month while the art is hung, like show movies and have music performances.
DM: And then on the horizon we’re planning on recording music as a house band and releasing records ourselves under it.

Gozamos: You’re all artists yourselves. What do you do and how is that going to tie in with the gallery?
MC: We have a couple different ideas in mind for different house bands that we’re setting up right now. Beyond that, most of us here in-house are DJs, so DJ nights are a thing that we’ll be able to regularly do. If we have a couple bands coming here to play, then we can talk with them and maybe slip our set in there with one of the house bands that we’re in.

Gozamos: So mostly you’d want to have outside artists featured, but you guys would keep it rolling on after their sets are done?MC:If they can bring a couple bands and play a show, it doesn’t mean that once their show is done there’s gonna be a room full of people in silence. We’re gonna be able to fill in that gap very quickly with some well-rehearsed DJs with all sorts of different tastes in music.
Gozamos: With all this talent, there must be someone working on something interesting. Any albums, or performances we’ll be seeing in the near future?
SL: We’re working on putting together a vintage soul group and releasing some records with that.
DM: As far as musical output from the perspective that we’re gonna be writing it, there’s gonna be a house band of some sorts that’s gonna feature the people that live here as well as a rotating cast of other players that we know that we’re excited to have in the mix.
MC: One thing that hasn’t been said yet is that the direction that we’ve been trying to move towards, so far as hardware in the basement, is half inch tape. The equipment downstairs can be recording eight tracks live on tape.

Gozamos: Do you plan to make this a recording studio?
MC: The gallery is probably first and foremost because of the gift that we’ve been given of the storefront, but the basement and the practice space adds an entirely new element because these guys have a considerable collection of equipment. Not only the tape recording equipment but the musical equipment: the keyboards, the speaker cabinets and microphones. Just the works. Ultimately we’d like to be able to tempt people with the idea that they don’t have to bring much to be able to come record in our basement. They can use the majority of our equipment, they can bring their guitars, you know things like that, but everything else we’ll have here to use. Some people here have a certain fascination with the analog sound and that is the direction that our basement recording studio has taken.

Gozamos: Impala Sound seems to rolls off the tongue. Any special interest in the African animal?SL:
Yeah, when they jump they get real high.