As I stepped over the crumbling ice on the cracked sidewalks of Logan Square and entered a nearly-hidden coach home, I was met by Frida Kahlo – literally at the door.

The old red entrance illuminated the presence of the renowned Mexican artist, painted in a proud and elegant pose, her famous indigenous dresses decorated in paper maché. And most intriguing of all was the quote that swum above her head: “Pies pa’ que los quiero si tengo alas pa’ volar” – “Why do I need feet when I have wings to fly.” 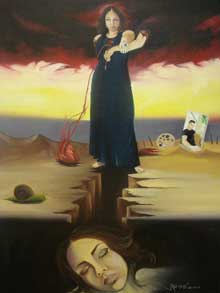 “Frida’s body was failing her – her toes and foot were amputated. If I ever was in a situation like that… I’d feel useless… if I couldn’t paint, I’d want wings too,” said Patricia Pérez, 30, explaining the reason why she was evoked to place Frida onto her door. At this moment, I realized that one can find Latin America thousands of miles away from its troubled borders – our art is alive where one finds a Latina/o determined to represent and redefine our identities.

Walking through her slick wooden floors and fresh hibiscus flowers I was dazzled by a painting full of blazing imagery, a self-portrait, her face gray and omnipotent above a Mayan temple, her arms portrayed as roots into the smooth, brown earth. “As a kid [painting] was my therapy… my salvation. I was a Puerto Rican and Guatemalan kid in Lakeview schools where the majority were white. I felt lost in my identity,” she said with a youthful smile.

It was at age nine when she first painted, portraying a freestyle music artist. Years past, she has kept her focus on portraits: “I create art, but its really the people who bring it to life, people inspire me.”

Two weeks into her job as an art instructor at Simons Park in the Humboldt Park community, she was told by a 13-year-old young woman that she was the “whitest” Puerto Rican she had ever met. Patricia’s response was, “I know what you meant, but I want you to tell me. If I’m here to teach you, I need to learn from you.” The young woman explained that she had never met anyone who treated  students with the same respect as adults. It was this uncommon teaching style that led her to realize that many of her students were trapped in a world of physical, sexual, and substance abuse. “I couldn’t just tell them to paint,” says Patricia, acknowledging her deep sense of responsibility. It was this that inspired her to help create, along with four other women, an all-woman’s mentorship group called “Las Caras Lindas” (The Beautiful Faces) four years ago at San Lucas Church in Humboldt Park. 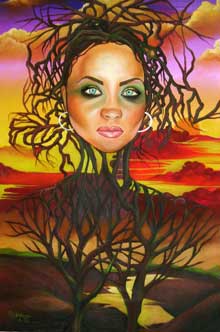 “We have an inside-out structure… first we work with the individual – who is the individual in this life… The second aspect is the community – who are you in this community, what is your role.” Patricia and the other mentors have the young women produce art on the program’s central themes and they also invite Latina/o and Black guest speakers (so the young women can identify with them) to conduct workshops whose topics range from domestic violence to safe sex. In addition, they organize cultural immersion trips around the country, meeting artists, poets, and writers. “[We want them] to understand their greater society and to be who and whatever they’d like to be.”

When asked on future plans, Patricia recalls a trip to Guatemala when she was 6-years-old, seeing children, her age, with oversized clothes and no shoes, begging for money. “I saw myself in these kids,” she says with a melancholic tone. That is why she is planning a trip next year to teach art to orphans in Tanzania and, in years to come, to do the same in Guatemala in a landfill that houses tens of thousands of people. “This is the work I need to do.”

Although the life of Frida Kahlo is now immersed in magical nostalgia, what made her life so marvelous was that she was deeply rooted in reality, supporting causes of the poor and the oppressed in México and Latin America. It is evident that Patricia is inheriting an important legacy. Frida Kahlo not only lives on her Logan Square door, but is alive and kicking in the artist that resurrected her.

If you’d like to see some of Patricia Pérez’s artwork, visit El Centro of Northeastern Illinois University, 3119 North Pulaski Road. Her work is exhibited at the satellite campus’ main lobby alonside other Chicago Latina/o artists from February 13-June 4, 2010. 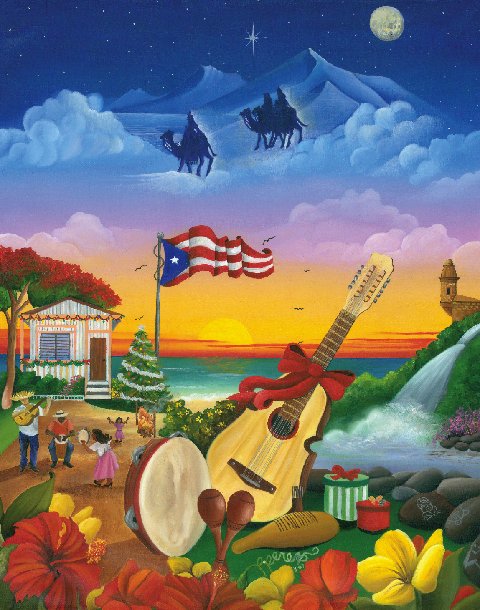